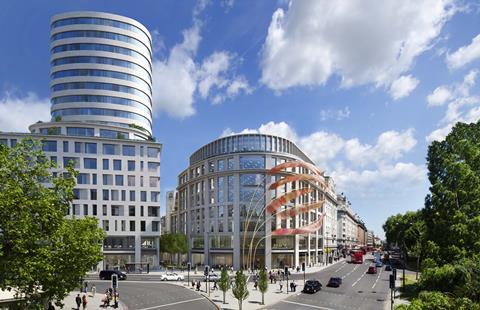 The long-planned Rafael Vinoly-designed scheme will include an 18-storey residential tower, a 7-storey commercial building and a range of new ground floor cafes, restaurants and shops.

Almacantar describes the project as a new “gateway” to London’s West End, due to its prime location opposite Marble Arch at the top of Oxford Street.

The scheme - which will replace the old 1960s 22-storey Marble Arch Tower - originally won planning in June 2014, but the project was rejigged to increase office space to 95,000 sq ft and these revised plans gained approval last February.

Kathrin Hersel, property director at Almacantar, said: “Marble Arch Place will be a stunning new landmark for London - an enviable residential and commercial address where the sophistication of Mayfair meets the calmness of Hyde Park.

“The scheme’s design and position makes it a prominent new addition to a flourishing West End.”