Native Land continues to mark out its territory 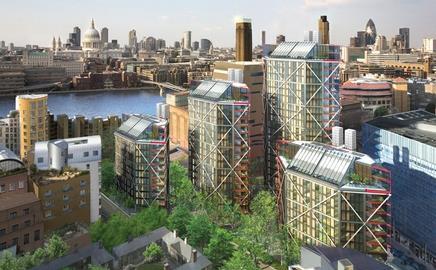 Despite having only started life in 2003, Native Land is already developing some of the capital’s biggest residential schemes. The £120m Montrose Place in London’s Belgravia is completed and work is well under way on the £400m NEO Bankside, a 50/50 joint venture with Grosvenor, which was designed by Rogers Stirk Harbour + Partners and is being built by Carillion behind the Tate Modern (pictured).

It’s not bad going for a company that still has fewer than 20 staff. But a good stable of private investors has helped. Native Land’s most prominent investor is the Duke of Buccleuch, the largest private land owner in the country. In 2007, four years after Native Land was formed, the duke’s company, Buccleuch Properties, bought a 50% stake in the company (the other 50% is held by Alasdair Nicholls and Jonathan Mantovani, the former managing director and development director of Taylor Woodrow Capital Developments).

But Nicholls, the chief executive, explains that he has needed “skill and judgment” to steer the firm through a recession and into the prime market.

“Having honed our skills in the recession in the early nineties Jonathan and I know how bad it can get. When it got to 2007 we took the view that it was all getting a little bit hot, so we sold a couple of sites we had and took our profit.”

Last week it spent £4m on several sites for its affordable housing obligations, but in December there was bigger news, when it spent £100m, again in 50/50 partnership with Grosvenor, on the site of a former school overlooking London’s Holland Park. Later this year it will be tendering an £80m construction deal for 8 Albert Embankment, a residential scheme in London.

Despite the economic climate, Nicholls is confident of making a profit: “We’ve made money on every single scheme and as an average across the projects we have made a 40% annual return on ours and our investors’ equity. We’ll carry on at the same rate after that.

“During the first half of the decade everybody benefited from rampant value growth and that made its way into the numbers. We’re now in an environment where that doesn’t exist and the only way that you’re able to maintain those levels of margin is through doing good land deals.”

we took the view that it was all getting a little bit hot, so we sold a couple of sites

The duke’s funding has helped Native Land continue its formula of finding patches of central London – most of which is owned by institutions, major property companies and the public sector – agreeing a purchase before the land goes on the market, then approaching private equity investors from around the world. A single-purpose limited liability partnership is then created for each scheme.

Nicholls says: “What we bring are the specific skills that relate to the unique issues of London. The best example is the planning process, which is the biggest obstacle for overseas investors.”

Nicholls learned how to tackle development problems at Taylor Woodrow, specifically on the central London Kensington Green scheme in 1991. It was making a loss, the Japanese contractor was struggling and no properties had been sold. Nicholls and his team stepped in and turned a £70m loss into a £50m loss.

Nicholls is still on the lookout for international investors and has recently returned from a tour of eastern Asia. One notable stopping point was Shanghai.

He says Native Land is taking a long-term view of China – that at some point the laws will be relaxed and the country’s citizens will be allowed to invest overseas – and he hopes to take advantage when the time comes. There are no plans to sell the business if investors come knocking, though.

Nicholls says: “We haven’t had any offers to sell up and I’m not soliciting them. We love what we do and hopefully we’ll be here in 20 years. We want to be the best player in this particular market, and once we’re known as the best we will look to get bigger.”