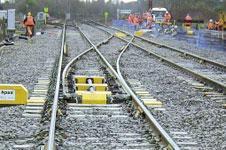 The company issued a statement on Thursday saying that chief executive Iain Coucher will chair a "high-level" meeting next week about the delays at Rugby.

He said: "I will be summoning our project managers, Bechtel, and the principal contractors involved to attend so they can personally explain to me what has gone wrong.

"They gave me assurances before Christmas on which they have not delivered. I want answers from them."

The West Coast route has now reopened but Network Rail could be heavily fined by regulators after tens of thousands of travellers were affected by the delays.

Scotland to London services were due to return to normal on New Year's Day but staff shortages meant work overran.

Newspaper reports suggest Network Rail is likely to stop using outside contractors to oversee rail renewal projects. The BBC, however, says the company has denied these reports.