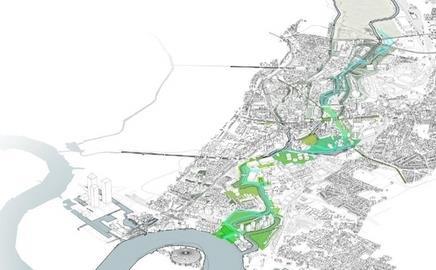 London Thames Gateway Development Corporation has unveiled plans for a new riverside park to link the 2012 Olympic site to the River Thames.

Lea River Park will use the banks of the Lea, new bridges and a new walkway called the Fatwalk designed by urban designers 5th Studio to link together six small parks.

Some of the parks are existing open spaces while others will require major works, such as the decommissioning of gas holders, and have to be purchased from private owners.

LTGDC will invest £28m in the first phases of the park working with Design for London and Lee Valley Regional Park Authority. More money will be needed to complete the scheme, some of which may be raised from the private sector.

Peter Andrews, chief executive of LTGDC, said: “This new park is going to play an important part in the regeneration of the Lower Lea Valley. It will connect communities on either side of the Lea River and provide desperately needed open space for local people.

"Crucially, it will also shape the development that happens in the area. By creating a high quality environment we will drive up the quality of design for the 35,000 homes we expect will be built in the area in the next decade.

"Rather than allowing the built environment and housing units to dictate the size and shape of open space, this new park will be the defining feature of how the area takes shape. It’s going to allow us to create attractive new communities where people will choose to live and work.”