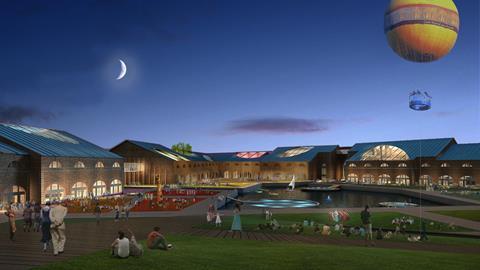 The competition, organised by the Architecture Foundation, sought a masterplanner for the 100,000m2 redevelopment of the former army barracks on the 8ha island featuring a mixture of cultural space, flats and offices, as well as the restoration of some existing buildings.

Proposals were recently exhibited at the city’s Central Naval Museum with most of the 6,600 visitors backing the view of judges that WORKac’s plan should win.

WORKac’s winning proposal will create a “vibrant cultural hub for the city” boasting a public park encompassing an outdoor amphitheatre and performance space. An elevated promenade will link the park with the existing buildings.

WORKac principals Amale Andraos and Dan Wood said: “We are very excited at the opportunity to work with the Iris Foundation and NHD on this critically important project for one of the world’s most beautiful cities.

“Our masterplan balances preservation with innovation, respecting St Petersburg’s past while paving the way for its continued artistic development and future.”

The competition was organised for the Iris Foundation, the cultural charity founded by Dasha Zhukova, partner of Chelsea boss Roman Abramovich.