The first phase of work at Silvertown Quays in east London has been approved by the local authority.

Newham council OK’d the plans last week by joint developers Lendlease and Starwood Capital which will include around 1,000 homes.

The pair took over the site in June last year from previous developer Silvertown Partnerships – a consortium of Chelsfield Properties, First Base and Macquarie Capital. 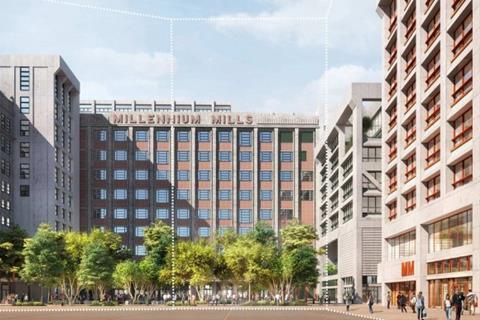 Phase one includes refurbishing Millennium Mills, a turn of the 20th century flour mill which has been derelict since the 1980s.

It has achieved more recent fame being used as a backdrop for films, TV series and music videos.

The site also includes a grade II-listed concrete grain silo which dates to the 1920s.

Firms working on the plans include Stirling prize-winning architects AHMM and dRMM as well as Pollard Thomas Edwards and Maccreanor Lavington.