Next phase of Meridian Water scheme in for planning

Enfield council in north London has submitted plans for the next phase of its £6bn Meridian Water scheme.

The council, which has submitted the plans as the landowner, said it was the largest ever submitted to the local authority and proposes 2,300 homes as well as a host of new infrastructure.

The application also includes proposals for student accommodation along with a hotel.

Galliford Try Partnerships is carrying out the first phase of work at the site which involves building 725 homes.

Meridian Water is a 25-year regeneration programme led by the council that will bring up to 10,000 homes to the area.

The site, which includes light industrial and out of town retail, covers a 210 acre stretch of land spanning parts of Tottenham, Edmonton and Walthamstow.

The winning developer for the next phase of work to be awarded, known as Meridian Two, is due to be announced by end of the year and will involve building 250 of the 2,300 homes.

Bids for the developer role are due in by the end of September. 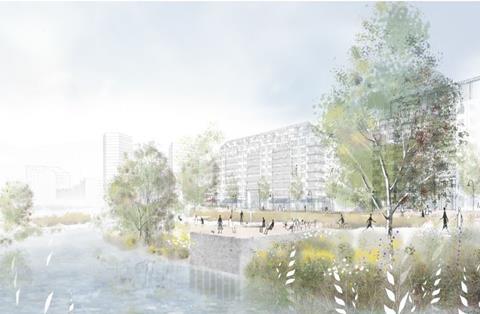