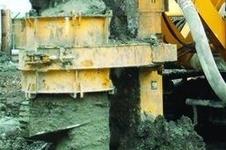 Ground engineering specialist Keller has reported a 22% rise in revenue to £788m in the first half of 2014, driven by growth in its North American business.

The firm’s exceptional costs in the first half of 2014 were mostly made-up of a £30m exceptional charge - which it announced it was making last week -  that related to a contract dispute over alleged faults in its work on a warehouse completed in 2008.

Keller has said the claims against it are being “vigorously defended”.

As previously revealed by Building, Keller is embroiled in a multi-million legal wrangle over faults at a £40m wine warehouse near Bristol, where it is facing a claim that piling errors caused cracks in the warehouse floor. Keller denies it is responsible for the faults.

As well as exceptional cost of £30m for the warehouse dispute the firm incurred other exceptional items, including amoritisation and acquisition costs, totalling £4.6m.

The £34.5m of exceptional costs were partly offset by recovery of £6.9m in contingent payments for its acquisition of Keller Canada, which it said it did not now expect to have to pay because Keller Canada’s profit had fallen below the expected level.

He added: “Keller continues to make positive progress against its strategy and is well positioned to take full advantage of future opportunities.”

Speaking to Building, Atkinson said the firm would continue to look at “bolt on acquisitions” to help further grown the business but had “nothing of substantial size” in the pipeline.

He said that increased sharing of different piling technologies across the group’s geographical businesses had improved the firm’s profit margin.