OFT faces uncertain future as fines cut by total of 84%

The OFT has suffered a major blow after final hearings in the appeal cases meant every penalty that was appealed by the firms it imposed fines on for alleged
anti-competitive behaviour was either reduced or wiped out. This comes at a time when the watchdog’s future is being considered by the government.

In a total of 25 judgments handed down by the Competition Appeal Tribunal (CAT) over the course of the past six weeks, fines of £79m were reduced to £13m.

The most striking result was the tribunal’s finding that there was no evidence at all to suggest that two of the companies appealing the fines - GMI Construction
and AH Willis - had engaged in cover pricing at all, while a further two firms - Durkan and North Midland Construction - were found not to be liable on certain aspects.

“It does raise some questions about the veracity of the evidence upon which the OFT relied for some of the other cases, which may not have been the subject of a liability appeal,” said Alan Davis, a lawyer at Pinsent Masons who advised Galliford Try on its appeal of its fine.

Summing up on the GMI appeal, Mr Justice Barling concluded that “difficult and important questions arise in relation to the ’evidence’ adduced by the OFT”.

The questions arise partly around the OFT relying too heavily on unendorsed transcripts of interviews rather than signed witness statements in preparing its evidence.

Some sources have suggested this practice was because the OFT had insufficient resources.

However, data submitted by the OFT to Building found that about £3m was spent between 2004 and 2009 on the investigation.

The outcomes of the appeals come at a critical time for the watchdog, given that the government is in the process of considering whether to retain it as an independent entity or merge it with the Competition Commission.

In its submissions to the Department for Business Information and Skills over its future, it is understood to have cited the cover pricing probe as one of its apparent successes.

The OFT would not comment on how the CAT judgments affect its reputation or indeed its battle for survival. A spokesperson simply said that the organisation “would consider carefully all of the judgments that are being made.”

The watchdog has until 27 May to decide whether to appeal these judgments. While the OFT has not indicated how it is likely to advance, it is expected to appeal. 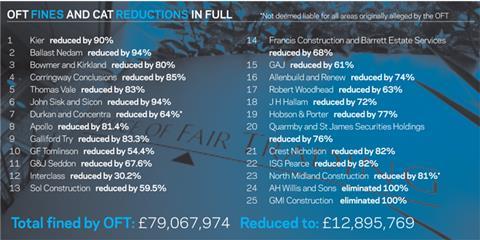