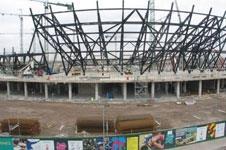 Government set to admit cost of £527m, due to lack of bidding competition

The cost of the Olympic stadium has risen by £22m in the last six months, the government will admit later today.

In its annual report of the Olympic budget, the Department of Culture, Media and Sport is expected to say the stadium will now come in at £547m, £22m higher than its last update in July.

It represents a rise of £43m from the original budget as outlined in September 2007. According to the Evening Standard the rises are blamed on “the development of the design, and the lack of competitive tension” in the procurement. Robert McAlpine, the contractor for the stadium, was the only bidder for the job.

In addition the government will say the cost of the Aquatic Centre has risen by £5m to £251m.

The cost of other venues, including the velodrome, has risen by £25m to £446m.

However, the DCMS will say that overall cost rises of £196m in the last six months will be offset by £193m of savings which have been identified over the same period.