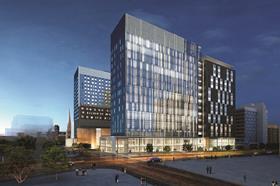 Laing O’Rourke is hoping it can draw a line under the huge losses it has racked up on a hospital scheme in Canada after the firm said a local contractor will now carry out the remaining second phase of the work.

Last January, the firm said the PFI hospital job had blown a £93m hole in its accounts.

That writedown on the Centre Hospitalier de l’Université de Montréal (CHUM), which the firm is delivering in joint venture with Spanish contractor OHL, was disclosed in Laing O’Rourke’s annual report.

The first phase, which Laing O’Rourke is responsible for, had been due to be handed over in April 2016 but the firm was forced to admit “substantial completion” had been delayed until March last year.

In an update on the scheme, Laing O’Rourke chief executive Ray O’Rourke said phase one had been handed over with full patient transfer completed in October.

He added the firm has now handed over building work on the second phase of the job to Canadian contractor Pomerleau. Around 15% of the scheme still remains to be finished.

O’Rourke said Pomerleau would be the principal contractor on the deal and admitted: “The project has resulted in significant financial losses for the Laing O’Rourke Group and minimising further risk on Phase 2 has been a priority.”

This phase involves demolishing an old hospital – which is set to take a year to complete – and replacing it with outpatient services along with clinical and admin offices as well as a car park and amphitheatre.

O’Rourke said the deal with Pomerleau was worth £235m and added that the firm would be retaining a team in Canada to “ensure that Phase 1 continues to run smoothly” as well as keeping an eye on the Montreal-based contractor’s progress on phase two.

Building first revealed Laing O’Rourke was facing heavy losses on the CHUM scheme back in November 2016.

Laing O’Rourke was brought in by OHL to help design and build the giant project (pictured) – which is the largest healthcare construction project in North America at 3 million ft2 across 21 storeys and carries a C$2.1bn (£1.2bn) price tag – less than 12 months into the scheme at the end of 2011.

O’Rourke said the news now meant the firm could finalise its latest annual accounts, for the year ending March 2017, which he said would be filed at Companies House at the end of this month.

He said the group results will show a profit – although he admitted this was before exceptional items, which are expected to include the CHUM project.