Arup and Mott MacDonald drafted on to winning team 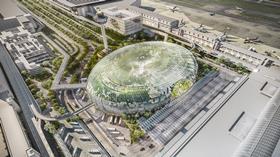 Designing Singapore’s huge new airport terminal is Heatherwick Studio’s biggest challenge yet, one of the practice’s most senior figures has said.

The scale and ambition of the project to almost double the size of the airport is unprecedented, said Stuart Wood, the longest-serving member of the studio’s design and leadership team.

Heatherwick and US architect KPF have now been confirmed as winners of the global competition to design a fifth terminal for Changi airport.

Grimshaw, working with DP Architects, and SOM and Moshe Safdie, were the two shortlisted teams that were beaten.

The project will increase the annual capacity of what is already one of the world’s busiest airports by 50m passengers.

Heatherwick’s original engineer Jacobs has been replaced by Mott MacDonald and Arup, who both worked on the losing Safdie bid. All three are on the airport’s panel of pre-qualified engineers.

Wood admitted: “Changi Airport Terminal 5 sets us the most challenging opportunity Heatherwick Studio has ever undertaken. The scale and ambition of this project is unprecedented.”

Twelve teams, believed to include Rogers Stirk Harbour & Partners, bid for the project, in 2016. They were whittled down to a shortlist of three last year with the shortlisting criteria including the teams’ vision and design themes for T5, their track record on previous airport projects and the experience of their key personnel.

T5 is the biggest development in Changi’s history and will be larger than terminals 1, 2 and 3 combined when it opens in the late 2020s.

A fourth terminal, designed by Benoy, opened last year, while Safdie is behind the Jewel development (pictured) at the airport which will feature shops, restaurants, a five-storey garden and the world’s largest indoor waterfall when it opens next year.

All the projects are part of the Singapore government’s plans to double Changi’s capacity and see off regional threats from Bangkok and Kuala Lumpur airports.