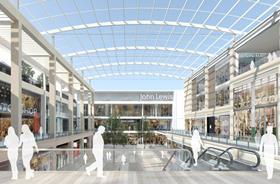 A joint venture between the Crown Estate and Land Securities has won planning permission from Oxford council for its planned £500m Westgate retail development.

The scheme won outline planning permission in March, and has now obtained full approval from Oxford council after a meeting of the city’s west area planning committee.

The scheme will entail the refurbishment of the existing Westgate centre and the redevelopment of adjacent land to the south, providing over 74,000 sq m of shops, 20,000 sq m of restaurant and leisure space, and 59 homes.

It will have enough space for around 70 shops, and provide two new public squares, a landscaped walkway and new 24 hour pedestrian routes.

The plans were developed over the last four years by four architects, Allies & Morrison, Dixon Jones Architects, Glenn Howells Architects and Panter Hudspith, with the process being overseen by Westgate masterplanners BDP.”