Review into scheme due out this month

The true cost of the Palace of Westminster refurb programme is likely to be at least £12bn – three times higher than previously thought estimates of £4bn, according to sources close to the programme.

Building understands that senior officials from the Infrastructure and Projects Authority briefed Number 10 on the true cost of the programme last year. 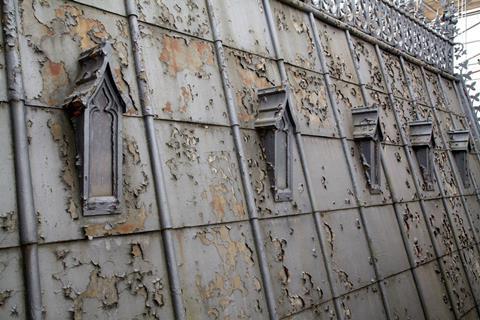 More than 40,000 problems have been reported with the fabric and insides of the Palace of Westminster since 2017 alone

And Meg Hillier, chair of the public accounts committee, told Building the cost could be “at least” £12bn.

Commenting on the figure, she added: “I could imagine it could be at least that. People will say ‘well it’s terribly expensive, and it’s taxpayer’s money and it’s outrageous’. Well yes, of course it’s expensive, it was never going to be cheap. There’s no way you can dodge the cost, what you can do is mitigate it.

“We’ve got to be honest with the British public – yes it’s going to be costly, you can’t do this on the cheap. Not doing it isn’t cheap, there’s no cost-free or cheap option now and the longer we leave it the more it will cost the taxpayer.

“The key thing is to get the go ahead to make sure that we are understanding what the scale of the task is.”

A review of the programme, due to be published this month, will outline a series of cost-saving measures in a bid to bring the budget under control and get the programme back on track.

The initiative was to upgrade a number of buildings across Westminster to serve as temporary homes for MPs and parliamentary staff while the Palace of Westminster was overhauled.

This work is being carried out by Wates and involves restoring and upgrading several grade I and grade II-listed buildings in Whitehall, including 1 Derby Gate, where it is already on site, and the Norman Shaw North building. Other buildings it is supposed to be working on include Norman Shaw South and 1 Parliament Street.

Plans to turn Richmond House, the former Department of Health building on Whitehall to create a temporary Commons chamber, are also in doubt. Drawn up by AHMM, this is due to be built by Lendlease.

Tom Brake, former spokesperson for the House of Commons Commission, the parliamentary authority responsible for the project, and an ex-deputy leader of the House of Commons, told Building: “If the Northern Estate programme doesn’t go ahead on its original basis, including the Richmond House proposals, it’s not clear how the remainder of the programme can go ahead.”

Parliamentary officials are refusing to confirm which projects have been shelved but Building understands that the NEP’s expected costs had doubled from £500m to more than £1bn.

The build works on Richmond House alone were expected to cost at least £350m, according to a source close to the programme. But he said: “It’s probably way beyond that, the cost is going to be excessive and that’s what the issue is there.”

Labour peer Lord Berkeley described the plans to turn Richmond House into a temporary Parliament as “a disastrous idea” that will “never be done for the money that they want”.

Commenting on the closure of the Northern Estate programme, Sir John Armitt, chair, National Infrastructure Commission told Building: “It sounds a little bit like it’s a bit of a back to the drawing board discussion going on, doesn’t it?”

Building understands this month’s review will present a number of new proposals which would reduce the period of full decant and reduce costs but will conclude that the only sensible thing to do is to have a full decant of MPs and peers to enable works to be done more quickly and easily.

In a statement to Building, a Houses of Parliament restoration and renewal spokesperson said: “As the review is currently in draft form no recommendations have been confirmed.

It added: “The review will provide clarity about the way forward so we can continue developing the approach to the restoration and in line with best practice bring forward a plan that will for the first time provide detailed, evidence-based estimates of costs and timescales for Parliament to consider once all investigations are complete and designs agreed.”

Sarah Johnson, chief executive of the Restoration and Renewal Sponsor Body, and David Goldstone, chief executive of the Delivery Authority, in a letter to Hillier earlier this month, warned: “The Houses of Parliament are falling apart faster than they can be fixed, with maintenance costs rapidly increasing and more than 40,000 problems reported since 2017.”

Only 21 surveys of the 150 or so that need to be done as part of the refurb programme have been completed to date. Asbestos and thermographic surveys are among those that have not been finished. And the project is not yet able to produce an “accurate, working Building Information Model (BIM) or analysis model for design purposes,” according to the letter. “Without an accurate BIM Model the design cannot proceed with any level of certainty,” it warns.

In addition, a space utilisation survey has yet to be done. This will provide data “of fundamental importance to many areas of the design including the fire strategy, accommodation, circulation systems, ventilation and heating.” The letter states: “Without this data the risk of overdesign in these areas is considerable and we will be unable to demonstrate value for money.”