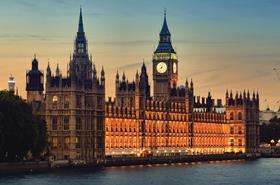 Vital repairs needed to secure the future of the Charles Barry-designed Houses of Parliament could cost almost £6bn and take over thirty years to complete, according to a detailed report published today.

The report of the Independent Options Appraisal team, made up of Deloitte Real Estate, Aecom and HOK, lays out three options costing between £4bn and £6bn for the renovation work needed to stop irreversible damage being done to the Palace of Westminster.

The group of consultants was commissioned jointly by both houses of parliament to undertake the study in 2013 following a 2012 report which showed that, unless significant restoration work is undertaken, major irreversible damage may be done to the Palace.

The study says the necessary work can be done in three ways. The first option, a rolling programme of repairs involving minimum disruption to the work of the parliament, would take up to 32 years and cost £5.7bn, once construction, delivery, fees for temporary accomodation, inflation and VAT are taken into account. The construction cost alone would be £1.3bn.

The second option, requiring a partial move out of first one house of parliament, and then the other, would still take 11 years, and cost between £3.9bn and £4.4bn depending on how much opportunity was taken to upgrade facilities as well as repair them.

The final option would require the wholesale temporary relocation of Parliament, and would still take six years. This would allow for much greater improvements, and would be the cheapest, costing between £3.5bn and £3.9bn, depending upon the scope of improvements to be made. Construction costs alone for this option would be between £1bn to £1.1bn.

A statement issued today on behalf of both houses of parliament, said: “The restoration and renewal of the Palace of Westminster will be a major challenge facing Parliament in the coming years and is certain to be a matter of public interest.  The process to establish a Joint Committee, which will make recommendations to both Houses on how to proceed, is already under way.  It will be for the Joint Committee to decide how best to carry out its task.”

Alex Bell, IOA Lead and Partner, Deloitte Real Estate, said: “Our analysis indicates that the Restoration and Renewal of the UK’s most famous building will be a challenging and potentially expensive exercise, but that it could also generate significant benefits to Parliament and the UK more widely.

“Members and Peers face unenviable decisions, although recent mega-project success stories such as the Olympics and Crossrail demonstrates the UK’s capability to deliver such projects successfully.”