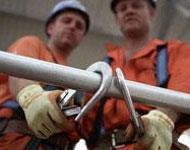 Scaffolders are the highest paid trade workers in construction, according to new analysis from the GMB union.

According to the figures (see table below), scaffolders, stagers and riggers are paid an average of £29,215 per year – although that is still below the UK average wage for all occupations of £29,999.

Despite the publicity given to high wages for electricians on flagship schemes such as Heathrow T5, workers in the sector are paid less than scaffolders, earning an average of £26,952 a month. This places them below driving instructors (£27,817) and train drivers (£37,234).

Paul Kenny, GMB general secretary, condemned the disparity of wages across the UK economy. He said: “There are some people at the top earning forty and fifty times those at the bottom. GMB want to see the tax system used to even out the rewards and the GMB want the National Minimum Wage to rise to £7 per hour to help those at the bottom.”