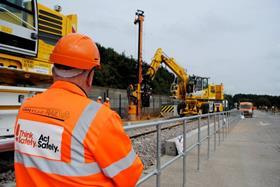 Piling and groundworks contractor Van Elle has said that it is on the hook for £1.6m following Carillion’s implosion yesterday.

In a Stock Exchange update this morning, the Nottinghamshire-based firm, which in its last set of results reported income of £94m and a pre-tax profit of £9.3m, said it was owed the money following its work for Carillion on a series of Network Rail jobs.

In a statement, it said: “The Group successfully undertook several contracts for Carillion during December in respect of which, payment has been applied for but not yet been received, and work has continued on some of these contracts into January 2018. As a result, Van Elle’s outstanding debt and work-in-progress exposure with Carillion is approximately £1.6m.”

It said that it was speaking to Carillion and the Official Receiver about trying to get the money back.

But it admitted: “Shareholders should note that, in the event that Van Elle is unable to recover any monies owed, there would be an adverse financial impact on the Group.”

Van Elle said around £2.5m of expected revenue it had coming from jobs for Carillion in the second half of its financial year was also up in the air.

It added: “It is too early to say whether there will be any effect on the commencement or completion dates of contracted work with Carillion, or what impact these developments will have on future work programmes, either in the rail sector or elsewhere, but the Group will monitor the situation closely and make further announcements as necessary.”

Van Elle is just the latest listed contractor to admit that Carillion’s collapse will have financial repercussions for the business.

Balfour Beatty and Galliford Try have already said that Carillion’s failure has left them facing an additional £80m bill for their work on a road scheme in Scotland, where the pair were carrying out work on a bypass around Aberdeen.

Morgan Sindall said the impact of the firm’s demises on two joint venture road jobs would be minimal but electrical contractor T Clarke said it was facing losses of £100,000 as a result of Carillion’s collapse.

And tool hire firm Speedy Hire admitted that its numbers might be hit by Carillion’s collapse when it publishes its next set of annual results.

The firm said in a Stock Exchange announcement yesterday afternoon that its business with Carillion was £12m last year and that it was owed £2m.