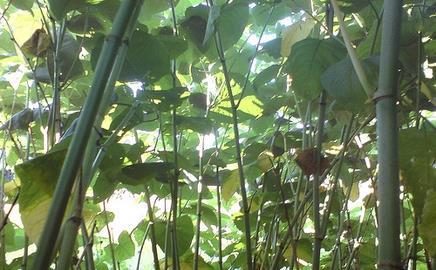 Japanese knotweed, a highly invasive plant that can delay construction schemes and be costly to eradicate, could be brought under control by introducing a natural predator from its homeland, the BBC has reported.

Scientists have been working on a strategy to tackle the rampant weed, which plagues the UK environment and is a particular problem on construction sites because it thrives on disturbance.

Credit: dankogreen
Japanese knotweed, a highly invasive alien plant that can be costly to eradicate, may now be tackled by natural predators
The 4m-tall plant, which was introduced as an ornamental in 1840 but quickly became widespread across the UK, also threatens plant diversity and can damage existing built structures. Weather patterns have made it a particularly bad problem this year.

Now a team of scientists working for non-profit agricultural research organisation Cabi have identified natural predators from Japan that could be used against knotweed, and have submitted their plans for government approval.

The scientists began by identifying Japan's many resident knotweed enemies - 186 insects and 40 fungi - then ruling out any that could threaten other plants. Those found to be most effective were a sap-sucking psyllid insect and a leaf spot fungus.

The scientists' proposals will be assessed by the Department for Environment, Food and Rural Affairs - which partly funded the project - as well as independent scientists, before going to public consultation.

Other UK funders of the research project included the Environment Agency, Network Rail and the South West Regional Development Agency.