The four-mile bypass will skirt Arundel

Plans for a new £250m bypass on the A27 in West Sussex have been unveiled by Highways England.

The four-mile dual carriageway will complete a missing link in the A27 and could save commuters more than an hour and a half every week by bypassing Arundel, according to the road authority.

The bypass has been designed to draw traffic away from Arundel town centre and reduce traffic on minor roads through the South Downs National Park.

Three options were put to the public for consultation between August and October last year.

During this time 2,062 people attended exhibitions, and nearly 3,000 people completing a questionnaire. More than 7,000 responses were received by email or letter.

Of the people who respond 79% agreed that improvements are needed, with 48% of respondents supporting Option 5a – which the final plan is based on.

The plans also include improved routes for pedestrians and cyclists, including a continuous dedicated path along the existing road around Arundel. 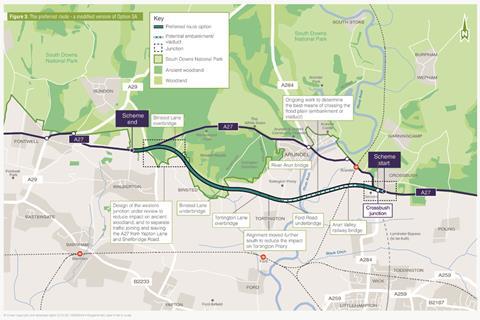