Simpson Haugh’s Clippers Quay would be tallest building in area

Manchester firm Simpson Haugh Architects has submitted proposals for a 34-storey tower on the waterfront in Salford that would be the regeneration area’s tallest development.

Simpson Haugh said the structure would be taller than Salford Quays’ current tallest building, the Blue Tower, and also taller than a 94m office block designed by Sheppard Robson which won consent in 2016 but is not yet under construction.

The Simpson Haugh block – earmarked for a 0.17ha triangular site – would deliver 216 new homes plus ground-floor commercial space and a roof terrace.

Simpson Haugh, which has been carrying out work on the Battersea power station redevelopment in London, is behind Manchester’s tallest tower – the 169m tall Beetham Tower completed by Carillion back in 2006. This will be eclipsed by the 201m South Tower in the city’s Deansgate area which is currently being built by Renaker. 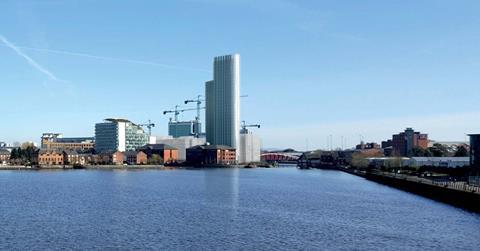