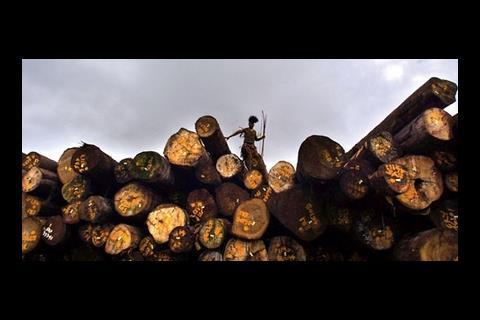 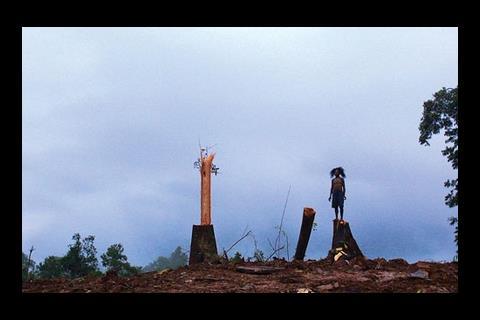 According to Greenpeace, the world’s rainforests are being devastated by the trade in illegal timber – a trade the UK profits from more than almost any other country.

‘Blair’s trashed another rainforest.” Suspended on a huge red banner, these were the words that greeted Allenbuild’s contractors as they turned up to work on the £13.5m refurbishment of Admiralty Arch on 10 July 2006. Traffic around the site was then halted as police clashed with 14 protesters who had scaled the building to expose the use of illegally forested timber on the scheme.

Both Allenbuild and the government initially said the origin of the wood was in line with the contract’s specification for “legal and sustainable timber”. Two months later, both admitted they had been duped: the information provided by suppliers was not compliant with government standards.

The timber was bintangor and red canarium plywood, which is sourced almost exclusively from the endangered rainforests of Papua New Guinea and the Solomon Islands. The wood’s original specification had not been passed onto the plywood suppliers. Nor had it been double-checked when brought onto site. As a result, the wood’s origins had gone unnoticed.

Two years on, a report from Greenpeace called Setting a New Standard indicates that the industry’s lack of awareness over the origin of its timber, whether as a result of a genuine mistake or the turning of blind eyes, has shown little improvement.

The organisation says the UK spends £712m a year on illegal timber, making it the world’s third largest importer. With EU legislation on the issue in the pipeline, the industry will have to finally put its house in order.

The scale of the problem

Firms such as Carillion, Taylor Woodrow, Bovis Lend Lease and Balfour Beatty have introduced policies to prevent the use of illegal and unsustainable timber on site. But Greenpeace’s research shows that others in the industry are lagging far behind.

Over 1.7 billion m3 of timber is harvested annually across the globe for industrial use, with the UK importing some 50 million m3 a year from 80 countries. While international protocols are in place to limit the destruction of forests, contractors have often found it difficult to ascertain the true source of timber. So some, like Allenbuild’s subcontractors, may have unknowingly purchased illegal or unsustainable timber.

The use of unsustainably sourced wood can seriously damage the corporate social responsibility of a company and expose clients and contractors to the wrath of protesters. In 2000, Greenpeace exposed the use of Amazon plywood on the British Museum site, and in 2003 it attacked the use of Indonesian plywood at the Home Office.

Additionally, financial pressures are placed on law-abiding companies by the amount of cheap, illegal timber on the market. This is particularly the case for manufacturers but the effects flow up the supply chain. The Timber Trade Federation (TTF) believes that, because of unfair competition, responsible companies are facing serious market challenges that undermine progress on environmental and social sustainability standards. “There is definitely evidence to suggest that illegal timber is depressing prices in the commercial world,” says Rachel Butler, TTF’s head of sustainability.

Jerry Percy, Gleeds director of sustainability, says some contractors do buy cheap timber, but there is a growing awareness of the ethical problems with doing so. “When you buy illegally harvested timber you’re not paying for the cost of environmental and social degradation. If you went to buy a product on the high street and someone told you three people were killed making it and villages destroyed, would you still buy it?”

Use of illegal plywood is the biggest problem. The UK used 1.34 million m3 of plywood in 2006, 750,000m3 of which was from tropical sources. Plywood bought from China is particularly problematic. Greenpeace says China imports this wood from Papua New Guinea, which is being “plundered with impunity by international logging companies”. This logging defies both the national law and the rights of the indigenous people: Greenpeace says those who get in the way have been intimidated, tortured and raped.

Some of the lure of illegal timber is cost-related. In January 2007, the latest date for which figures were available, Chinese hardwood plywood was 25-30% cheaper than Brazilian plywood and 30-40% cheaper than Indonesian and Malaysian products.

And, perhaps surprisingly, there is little effective EU or UK legislation to stop illegal timber entering Britain. Voluntary agreements are in place between the EU and exporting countries under the EU’s FLEGT licensing scheme, but environmental group WWF estimates that even if all agreements under negotiation were kept to, the amount of illegal timber entering the EU would fall by just 10%.

In 2000, the UK government required all its departments and agencies to “actively seek” to buy legal and sustainable timber. But weak guidelines have meant the impact of the policy remains limited.

The Construction Confederation is now urging contractors to exercise greater vigilance over the source of timber. A spokesperson said: “As an industry we need to remember that even though timber has been proven to be a sustainable material, this is only true if it is sourced from a properly managed and independently certified forest.”

Forest Stewardship Council (FSC) certified timber is the only widely recognised certification scheme. To prove it is FSC certified, a supplier’s delivery note and invoice should say so, and should carry an FSC “chain of custody” number.

Problems arise when, as in some cases, sustainable and illegal timber have been mixed or when a supplier is FSC-certified, but the product itself is not. Mariana Paoli of Greenpeace says: “Claims such as ‘our company has FSC chain of custody’ are not proof that the materials are FSC-certified.”

And buying uncertified timber is even more problematic. If a contractor wants to prove that the wood is legal, they must provide evidence of the chain of custody, including the retailer, importer, processor, forest company and forest source. Even then it is almost impossible to prove that it is genuine.

Can it be stopped?

Until now the incentive against using illegal timber has been fear of reputational damage. But the European commission is working on a “forest package” of legal measures and is to propose a green paper on the issue, with a hearing on possible proposals scheduled for 10 September. This will contain a legislative proposal to ban timber derived from illegally harvested trees, propose legal sanctions against states and firms caught using illegal timber and to toughen up the FLEGT system.

Given the challenges of proving custody, some believe this legislation is the only way forward. Gleeds’ Percy says although “the good are getting better, the bad are getting worse”. He says: “People who believe it is the right thing to do will see the reward in workload in the future, but sometimes people need a stick to see the carrot.”

The TTF’s White believes legislation is the only answer. In a letter to Stavros Dimas, the European environment commissioner, he says: “For a number of years we have helped our members to introduce measures to exclude illegal timber from their businesses. In spite of this, we cannot guarantee that timber imports are free from products from destructively and illegally logged areas.”

With industry and protesters united behind an overhaul of the law, construction firms would do well to start separating their illegal wood from the trees.

Demand tight specification
Be specific when asking contractors to use sustainable timber. For example, specify that you will only accept FSC-certified timber.

Keep the paperwork
This allows you to prove specifications were met