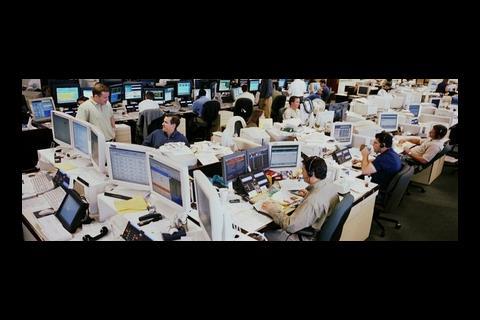 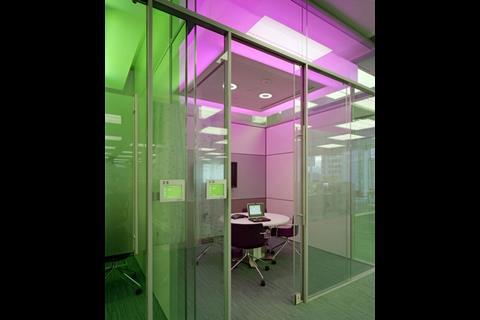 How can banks’ trading floors, with their walls of power-hungry heat-generating screens, reduce their carbon load? Katie Puckett reports

Trading floors may be among the most high-powered environments on earth, but they are not usually known for their energy efficiency. The nerve centres of London’s banks are among the most energy-intensive aspects of their business. Dealers pride themselves on keeping tabs on up to eight screens at a time and they need powerful systems to sustain the adrenalin-fuelled frenzy. Not only do all those screens use masses of electricity, they also create an almighty cooling load for the building.

But as more and more trading takes place through power-hungry computers, financial services companies are becoming more aware of their carbon footprints and making the energy efficiency of their buildings a key tenet of their corporate social responsibility (CSR) policies.

There is no question of compromising the comfort or functioning of the floors themselves, so controlling the energy demands of their dealers is a conundrum for the banks.

‘It is a tricky one,’ admits Gary Wingrove, director of strategic real estate projects at UBS. ‘We are being pushed more and more for ever-increasing IT capacity to run the trading floors, but we also have our in-house ecology unit trying to make sure we’re doing the right thing in terms of our sustainability policies. It’s an issue high up on the agenda at board level.’

For many banks the solution is to make savings elsewhere. UBS’s CSR strategy has led it to cut the amount of business travel undertaken by employees and to buy carbon offsets for any that is unavoidable. It buys recycled paper and all the energy used in its London offices is produced from renewable sources.

Nevertheless, the bank’s buildings are on average 20-25 years old, and there is little the team can do to make a significant impact without wholesale refurbishments. Improved ‘housekeeping’, as Wingrove calls it, such as making sure unnecessary lights and computers are switched off out of hours, has cut electricity bills, but the bank still struggles to cut power consumption from the IT that is so integral to its business.

‘Trading floors are very big contributors to electricity use because there are lots of screens and lots of users, which demands more and more cooling,’ he says. ‘The problem is that we’re driven by lots of IT equipment that has manufacturers’ warranties saying this kit must be run at a certain temperature. It could probably run at higher temperatures, but if we do, warranties become invalid. That cooling uses an awful lot of energy. We are very much in the hands of the manufacturers of IT kit.’

Outside the Square Mile, UBS’s datacentres use an even greater proportion of its power – as much as 45% – although Wingrove says it is looking at using natural resources at one site to contribute the building’s cooling needs.

Consultants working on trading floors say the same thing. ‘In essence, it’s about the IT,’ says Bulen Hourshid, a partner in the M&E team at Davis Langdon. ‘A dealers floor is one big box. It’s the processors that process the data that generate all the heat. They’ve got five, six, seven screens each, so you’ve got the heat from the monitors and the processors in the computers. Demands are getting greater and greater. Consultants themselves have to be closer to IT people than we used to because technology is evolving.’

But he believes the technology is improving. Blade servers – high-density clusters of ‘servers within servers’ take the load away from trading floors into cabinets elsewhere. As well as reducing energy costs and carbon emissions, displacing cooling to a more controllable environment can also make IT performance more reliable, and reduce the risk of computers overheating.

‘They’re very quiet, very large supercomputers,’ says Hourshid. ‘If you put all the heat into one small environment, it’s much easier and cheaper to cool than huge dealer floors.’

The introduction of flatscreen monitors has dramatically reduced both power used and the cooling load, as have ‘thin client’ systems where dealers work on terminals linked to a central system rather than PCs with their own hard drive.

But behind closed doors, banks and their construction teams are also making advances in cooling technologies for the buildings themselves – although they are reluctant to share potentially market-leading ideas.

At Cyril Sweett, Simon Harris, director in the engineering services team, is working on a trading-floor project but his client insists on secrecy on the details.

‘It’s a huge challenge as the world becomes ever more IT dependent,’ he says. ‘Solutions for cooling buildings tend to be relatively constrained, so we have to look at innovative systems to get heat away from traders’ desks and remove it from the point of generation before it escapes into the room.’

Contractor Como is installing a system for a London client that works on similar principles and will pipe coolant around each trader’s desk, effectively imprisoning each processing unit in its own fridge.

The system uses carbon dioxide, which absorbs seven times more heat than chilled water, produces no condensation and does not interfere with the machines themselves. The air temperature around the units is just 21° C – a significant improvement on current summer ‘knee-well’ temperatures of above 30° C.

‘You still need air conditioning, but only for the build-up of heat from individuals and solar gain,’ says director Robin Harris. The bank’s tests found this can save 30% of energy needs.

Density is a pretty effective way to deal with that intense trading environment, rather than heating and cooling more floors

There are other ways trading floors can be made less of an energy pariah – for example, by taking their design back to first principles. At Sheppard Robson’s interior design division, partner Helen Berresford has been looking at how they are used as workplaces. She carried out detailed research on dealers’ requirements on a BP trading floor. The project covered 300,000 sq ft of BP’s offices and was completed 18 months ago. She found the high density that causes such problems for cooling systems is an essential characteristic of trading floors.

‘It really is like a traditional marketplace in a town. Traders love being together and getting the buzz of the market, and everyone wants to be near the guys in the centre, who are making the most money. Communication is the most important thing to them.’

of trading to prevent the rumour-mongering that was linked this year to the collapse of Bear Stearns and the London share scare over HBOS.

Sheppard Robson came up with various designs that had a more organic, sociable feel. Although they were popular they could only accommodate two-thirds of the traders on the floor, so BP’s two floors would have to have been expanded to three.

‘Density is a pretty effective way to deal with that intense trading environment, rather than heating and cooling three floors, which would take an awful lot more energy than you’d ever manage to cut,’ says Berresford.

‘We looked at varying options in terms of the energy on the floor and came up with the solution that minimised the amount of space traders have to get the density on the floor but also a comfortable working environment.’

The BP floor was equipped with chilled beam cooling, which uses less energy to pump air around. ‘It also helped that the floor-to-ceiling heights were more than 3 metres, so we could maximise use of daylight. We had quite a sophisticated lighting system that changed over the course of the day, so you’re not having full lights on all the time.’

Berresford says they also managed to minimise the number of meeting rooms needed on each floor, and maximised their use. They found that meeting rooms often had only 60% occupancy, but had to be cooled all the time. As well as a meeting room booking system, they also customised the dropped ceilings so the light rafts glowed orange, green or yellow when not in use, but turned to white when people entered. Traders could see at a glance from across the floor whether a meeting room was free, and occupancy shot up. The cooling in the meeting rooms was therefore more efficient and reduced the amount of cooling demand that was drawn away from the main trading floor.

When any compromise on trading-floor activity or technology is out of the question, clever solutions such as these will bring the carbon footprint down to a halfway-decent level. The winners in the sustainability game will be the companies who can improve energy efficiency without anyone noticing they are doing it.