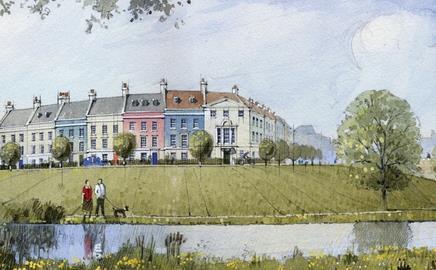 The design of the settlement of Sherford is based on Poundbury, the nineties Dorset town that was also backed by Prince Charles. The development (pictured) has been masterplanned by the Prince’s Foundation for the Built Environment and includes 5,500 traditionally styled homes, a high street and a cricket pitch.

Its developer, Red Tree, is close to agreeing a section 106 deal with South Hams council that will enable it to build just 25% of the first phase of the scheme as social housing, compared with the council’s target of 50%.

According to the proposals, which will be presented to councillors today, South Hams will take 35% of the profit from future phases of the scheme to fund social housing in later phases. The council hopes this clawback arrangement will ultimately mean 20-35% of homes on the scheme are affordable.

It is a gamble, but it’s an even bigger one to wait for the housing market to recover

The council conceded that the arrangement was a risk, because it depended on future market conditions, but was said it was better than the scheme stalling. Steve Munday, the council’s head of planning and building control, said: “It is a gamble, but it’s an even bigger gamble to wait for the housing market to recover. With this, we are getting a significant number of social housing units and extracting the best we can, given the current circumstances.”

The deal is subject to approval by councillors at a meeting at the end of July; if agreed work could start in March 2010.