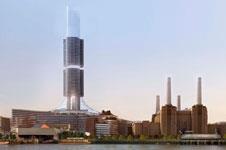 The developers of some of London’s biggest schemes, including Battersea Power Station and the King’s Cross redevelopment, have routinely checked plans with the Prince of Wales to avoid him making any subsequent damaging interventions.

In the week following the withdrawal of Lord Rogers’ designs for Chelsea Barracks after pressure from Prince Charles, developers Argent and Treasury Holdings confirmed that plans for the 8 million ft2 King’s Cross scheme and Rafael Viñoly’s Battersea Power Station had been presented to the prince.

Building also understands that other London developers, including Land Securities, routinely receive letters from Clarence House regarding large schemes. It is believed that these offer “opinion and advice” on the designs of buildings, including Rafael Viñoly’s controversial “Walkie-Talkie” for 20 Fenchurch Street in the City.

Peter Freeman, founder of Argent Group, confirmed that the same had been done with the King’s Cross scheme. He said: “The prince has a big voice.”

I agree with a lot he says, but it’s inappropriate that
he has so much influence

A spokesperson for Land Securities said: “Prince Charles has always been very vocal. He didn’t like 20 Fenchurch Street.”

A senior industry source said: “If the prince sees a developer working on something big that he has an opinion on, he’ll write and present any criticisms. Developers don’t have to consult with him as a result, but they often do. I suspect the prince can be very influential when it comes to development.”

Some developers including British Land and Heron said they had never run plans by the prince.

David Roberts, deputy chief executive at developer Igloo, said checking major schemes with Clarence House was accepted practice. But, speaking in a personal capacity, he said: “I agree with a lot he says, but it’s inappropriate that he has so much influence. It can’t be right.”

A spokesperson for Clarence House said: "The Prince of Wales is not routinely contacted by property developers seeking his opinions or his approval on major projects in London, or elsewhere for that matter. A search of correspondence in the past five years, for example, has found just three exchanges of letters about major property developments. In none of the cases was the prince's approval sought."