An estimated 101,000 private homes broke ground in 2011, an improvement compared with 2010 but a low level compared with the long-term average and significantly short of government projections for demand. Housing is a political hot potato and the weakness of starts, published by the Department for Communities and Local Government (DCLG) in Q1, did nothing to lessen this.

Anecdotal evidence was stronger in early 2012 and the weakness of the DCLG figures was a surprise to many. The latest CPA/Barbour ABI private housing contract awards index strengthened significantly in May, rising 9% compared with April to 131, suggesting that the slow recovery in housebuilding may continue as 2012 progresses.

Turning to demand, transactions remain at a higher level than last year but impetus has waned in recent months and prices have edged down. Allowing for recent distortions, the underlying trend in housing market activity is broadly flat. Confidence and the availability of lending are key and the mildly favourable outlook for the remainder of the year could be easily quashed. 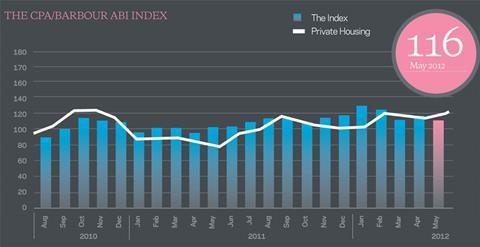