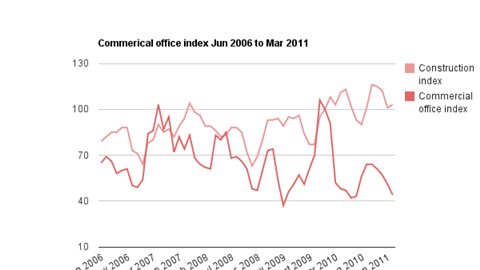 Near-term prospects for the office construction sector have improved marginally, according to the latest CPA/Barbour ABI commercial offices index.The index, which is based on the average of contracts awarded in the past three months, rose for the first time since December, to 71 in March (see below).

Take up in office space rebounded in 2010 and the UK corporate sector returned to business as usual following the financial crisis. Agents in central London warned that supply will become tight over the next two years, although the pace of activity slowed significantly in early 2011. Outside of central London, however, markets remain blighted by vacant available space and a discernable improvement is unlikely to be imminent.

Typically, the new development cycle lags an upturn in market activity by 12-18 months. Commercial property values suffered a 45% peak to trough contraction during the downturn and banks continue to be reluctant to lend on real estate, especially considering that the amount outstanding in commercial property loans at the end of March 2010 was five times higher than 10 years ago. Research by Jones Lang LaSalle found little appetite among lenders to finance speculative commercial development and that even finance for developments with pre-lets commands a significant interest premium in the current market.

So the buoyancy of occupier demand in central London in 2010 is encouraging, but in today’s risk averse market, a significant step-change in development activity 12 months later is unlikely.

That said, ONS figures suggest that office construction lost nearly half of its value in the three years to 2010 and yet the outlook for 2011 is marginally better. Improved market fundamentals will continue to drive growth in refurbishment work as landlords compete for tenants’ attention and the construction of large, high-specification commercial towers in London will also provide a boost.

Recovery, however, will be slow. A combination of uncertainty about the stability of demand and financing constraints will limit the potential for a significant expansion until 2013, when today’s economic risks will have subsided.

Kelly Forrest is senior economist at the CPA