New legislation will extend the energy price cap and support the creation of a new market standard for heat pumps in a bid to transition the UK toward cleaner and cheaper energy.

The measures will be included in an Energy Security Bill, announced today in a Queen’s Speech which also saw the government commit to creating a UK Infrastructure Bank, dedicated to supporting growth and delivering net zero.

The proposed bill will enable the extension of the energy price cap beyond 2023 and would see Ofgem appointed as the new regulator for heat networks. 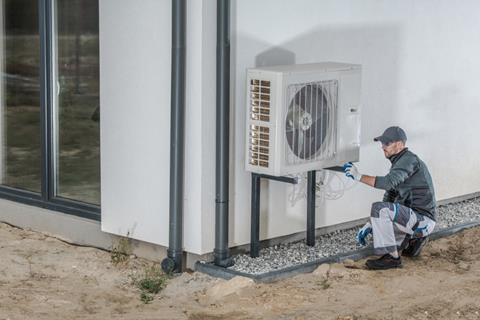 A new standard for heat pumps will support innovation, the government said

Additionally, there will be measures to support industry in growing the consumer market for electric heat pumps.

Downing Street says a new market standard and trading scheme for heat pumps will support innovation in the market and help lower costs.

Measures to create a Future Systems Operator to provide strategic oversight of the electricity and gas sectors, clean up the UK’s legacy nuclear sites, and give government new powers to reduce the risk of fuel supply disruption will also be included in the bill.

While the government says one of the bill’s main purposes is to deliver its Energy Security Strategy, announced last month, there was little in the speech to clarify how the government would fulfil its promise to build seven new nuclear power stations.

In addition to the Energy Security Bill, the government will introduce a UK Infrastructure Bank Bill this year, which will establish the state-owned investment bank in law with objectives to support regional and local economic growth and support the transition to net zero by 2030.

The bank, which has £22bn of financial capacity, was launched last year and has already undertaken a number of investments, including a £107 million loan to help create the Teesworks Freeport area, which will host a renewable energy site for the manufacture of offshore wind turbines.

According to Downing Street, enshrining the bank’s objectives and functions in law will ensure that it will be a “long-lasting institution with a clear policy mandate”.

The bill will set out measures to ensure the bank’s operational independence as well as clear accountability for how the bank is to be run, including reporting and board requirements.