Readers' survey: 93% fear coronavirus crisis could spell the end for their firms

Construction companies also pessimistic about when work on sites might restart

More than 90% of those working in the construction industry fear the coronavirus crisis could spell the end for their firms.

A survey carried out by Building and its sister titles Building Design and Housing Today, in association with Fenwick Elliott, found that 39.4% of respondents were “very concerned this crisis could cause insolvency” while around 53% were “slightly concerned”. They said their businesses were solvent for now but admitted work had slowed dramatically.

One said: “We are a small business that can ride it out for up to three months. After that, who knows.”

Another added: “We’re still very busy, but hope invoice payments will not be delayed. Also we are not optimistic that sites will be fully up and running in the next six months-plus. We need to keep a long period of pre-site work going and coming in.”

>> Comment from Building's editor: Business as usual? It’s anything but 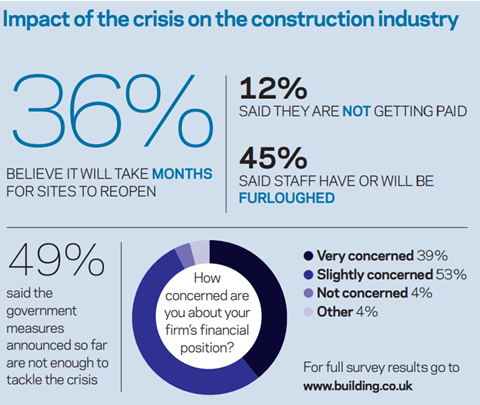 source: survey of over 600 Building, Building Design and Housing Today readers, in association with Fenwick Elliott

The survey also revealed that firms were not confident about when work on sites might restart. Nearly 41% of respondents said they did not know, while 35% said they did not think it would be for several months.

Stories from the sites:

>> ‘I just wish his employer cared about his staff’

A majority (53%) of people said that all staff at their business were already working from home, while another 18% said at least 75% of people were operating remotely.

Around 32% of respondents said that clients had instructed their firms to carry on working, once additional health and safety measures were in place, while a quarter said clients had asked them to stop work immediately.

One respondent said: “It varies. We had clients who instructed us to close the sites as soon as possible as they feel they have an obligation to keep everyone safe. Some [are] trying to postpone the closure as this will affect them financially.”

Another said: “[We were] initially instructed to stop all work immediately and the following day they changed their minds and instructed us to carry on.”

12% said their firms would lay people off, or had done so already

Firms are furloughing staff, with 45% saying that workers have or will be put into the system whereby 80% of their wages will be paid by the government. About 10% said some staff had taken pay cuts, while another 12% said their firms would lay people off, or had done so already.

A third of people said that all staff were fully employed and would remain so for the foreseeable future.

Private housing, commercial and retail and leisure sectors were expected to be the least likely to bounce back in the longer term. People said these sectors would suffer a serious decline, while suggesting that the infrastructure and education sectors would fare the best, suffering no significant change in the long term.