When the government decided to axe regional development agencies, uncertainty over the future of their £446m portfolio of development sites nearly led to a disastrous fire sale. Having taken a u-turn on the issue, what are the coalition’s plans for the sites now? 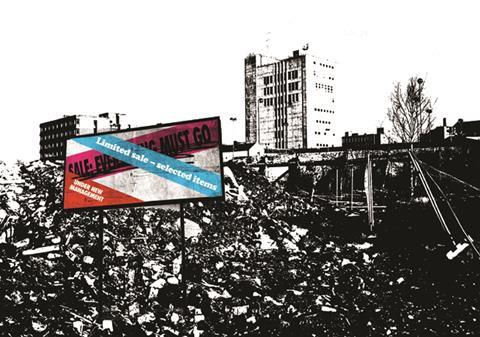 A year ago this week the coalition government said it was going to axe England’s nine regional development agencies. The announcement, which came amid a flurry of stories about £50,000 RDA staff parties and taxi perks for senior executives, felt like an easy cut for the new government. Never mind their support for developments such as Peel’s Media City in Salford and Quintain’s Middlehaven scheme in Teesside, the communities secretary Eric Pickles quipped that they would be restructured “a bit like Anne Boleyn was restructured”.

Tory policy adviser Glyn Gaskarth summed it up in his blog: “Abolishing RDAs is a simple, relatively painless cut. Few people will march to save them.”

As the decision was made, nobody was thinking about the agencies’ land holdings. But it quickly became clear that the coalition’s first big decision on regeneration could lead to a fire sale with horrendous ramifications for £500m of development sites bought with taxpayers’ money. A year on, the government has reversed its position and is weeks away from a deal to transfer the vast majority of the portfolio to the Homes and Communities Agency (HCA). However, 12 months of uncertainty have done no favours for schemes that were already struggling to attract interest from the private sector because of the state of the market. So what exactly happened and where does it leave regeneration policy?

The RDAs were set up in 1999 to promote economic growth in the regions and close the gap between the North and the South. But with £1.4bn of government money to spend each year, most of them quickly realised that the key to boosting the local economy was physical regeneration: flagship developments that either introduced new industries, or revived eyesore sites in the middle of former industrial towns. The idea was that the RDA would buy a site that the private sector couldn’t make work, pay for remediation, decontamination, planning permission - whatever made it unviable - and sell it back to the market. Different RDAs had different strategies but they all ended up with portfolios of sites, most with problems, but all acquired with precious public money.

When the agencies were abolished last June, the Treasury made it clear that the organisations had to be wound up by the end of next March. The bodies that are supposed to replace the RDAs’ economic growth role - local enterprise partnerships - have no power to own assets, so the land would have to be sold. The RDAs - according to research by Building - have a portfolio of development sites worth £446m, with another £87m of offices, plant and equipment. They also have stakes in numerous joint ventures and other enterprises.

The prospect of a fire sale loomed at one of the lowest points in the land market. Gerry Hughes, partner at real estate agency GVA Grimley, said: “You’d flood the market and not achieve the best price. It would have been the wrong thing to do.” Jackie Sadek, chief executive of UK Regeneration, put it even more plainly: “A fire sale would have been a complete disaster.”

Part of the problem was that the sites are only in RDA ownership because they are not viable for the private sector. So while their importance to the recovery of local economies is often huge, and their potential value also high, work needs to be done before profitable private development can take place. Dominic Williams, a partner in regeneration consultant Hewdon, said: “Much of it there is little demand for. Without continued public subsidy they would be put in mothballs.” Nigel Smith, also a partner
in Hewdon, added: “It just didn’t make any sense to sell these sites: the reason they were bought is because the private sector wouldn’t go there.”

Liverpool is one council that is grappling with this issue. Councillor Malcolm Kennedy, cabinet member for regeneration, said: “If we’d been made to sell these off first-come, first-served - the first person that puts a fiver on the table gets it, then we’d just end up with anyone owning these sites, people with no ability to actually develop. It could have held up development for a generation.”

However, when officials at the Treasury and the business department, the government department the RDAs report to, realised the possible problem they had created, they told the agencies to stop talking to potential buyers, and first come up with detailed plans for what would happen to their assets, meaning progress on some sites ready to go to market was stalled. The £300m Pall Mall development next to St Paul’s Square in Liverpool, owned jointly by the North-west Development Agency and the Muse-led joint venture the English Cities Fund was one project hit. Despite a soft launch at Mipim last year, work to find a developer for the site was subsequently put on hold (see The waiting game, below). Meanwhile the RDAs’ asset plans were submitted in January and are still officially being considered by central government.

As a result of these submissions, the Treasury allowed the agencies to put on the market about 20% of their assets, sites without significant problems that were advanced enough to attract a fair price. But in many cases the RDAs wanted the rest to be sold to councils so they could control the regeneration of sites in their areas. It was hoped this would fit with the coalition’s professed “localism”, giving power back to elected politicians. The problem was that councils do not have the money to pay for the sites - and cover the liabilities - upfront. The Treasury put its foot down. It decided no land could be passed to councils under deals that deferred payment until a later date. Another solution was needed to avoid a potentially disastrous waste of public money. 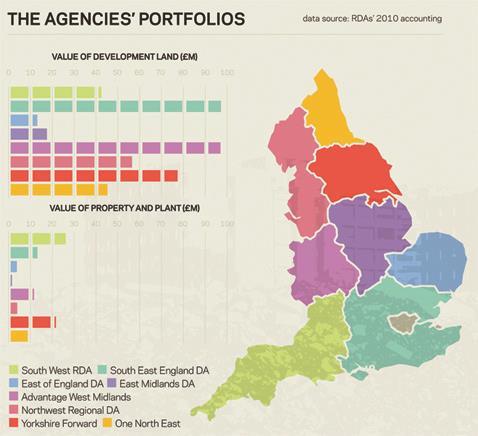 Close to a deal

At this point, in early March, serious talks started over the possibility of transferring the land to a regeneration quango, the HCA, which would hold the sites in “stewardship” on behalf of the local authority they sat in. Government sources have confirmed that the Treasury has now agreed in principle the “inter-government transfer” required to hand over “most” of the remaining assets.

Due diligence is being carried out, with the Treasury running value-for-money appraisals of every suggested site. A communities department source said decisions were
being finalised over which sites would be transferred, and the number of RDA staff that would move to the HCA to manage them. It is thought this will include some significant shares of joint ventures, such as the East Midlands Development Agency’s Blueprint JV with Igloo, worth £47m, or the Northwest Regional Development Agency’s JV with Ashtenne over its industrial estate portfolio, which is set to earn the RDA £139m over the next five years.

An HCA spokesperson said the deal would be agreed formally by ministers this month. She said: “There is an ongoing discussion about the remaining assets. This includes the possibility of transferring these remaining assets to the HCA, which would then manage them under stewardship with local partners and dispose of them, or transfer them when they are ready to be sold.”

The communities department source said: “The principle has been agreed, and we’re hoping to complete in October.”

The deal will add significantly to the HCA’s own holdings, which come largely from the leftovers of the post-war English new towns programme. The HCA will want to use the sites to help increase housebuilding and they could give the agency, which has had its funding cut by 64%, more leverage. However officials stress caution. “You have
to remember that the liabilities will transfer with the assets. These are difficult sites. Nobody is going to get very rich with this.”

This comes as the coalition’s spending review has cut total annual funding for regeneration, via the RDAs and other programmes, from £7bn to about £1.5bn.

The fear is that without that money, the sites may sit dormant, whoever owns them. Sadek of UK Regeneration said: “This is the big issue: will money be forthcoming to bring the sites forward or will they just sit there?”

In the meantime, the private sector has had to wait while the coalition shuffles its deck. Sites such as Pall Mall, which could have helped spearhead the recovery of their region, are sitting vacant. Paul Evans, director at UK Regeneration, said: “Any transition is bound to lead to a hold-up. But the most significant thing is that government has to make every effort to close out this deal as soon as possible avoiding any more delay.”

The biggest remaining question is whether the u-turn over the sale of the sites should now prompt a wider rethink of the coalition’s regeneration policy.

The Pall Mall scheme on the edge of Liverpool’s new central business district at St Paul’s Square, is supposed to deliver 93,000ft2 of offices over 10 to 15 years. A third of the site, which is currently a surface NCP car park, is owned by the Northwest RDA. Alongside Liverpool Vision, the agency started marketing the site to developers at Mipim in 2010, with a view to getting the development going last summer. The English Cities Fund, which developed the adjacent St Paul’s Square, is thought to have expressed an interest. However, with the closure of the RDAs, the sale was put on hold. A source close to the process said: “You never know what would have happened with the market, but the English Cities Fund was in conversation with the NCP and we had a mini site launch. But it all got put on hold.”

Councillor Malcolm Kennedy, cabinet member for regeneration at Liverpool council, says he is still being lobbied by developers interested in getting the scheme going - but it is reliant on more public funding. The city is waiting while the ownership is being sorted out before any decisions are made. He says: “I’m confident the HCA will co-operate with us. But the lack of clarity about whether we have control of the site isn’t helpful, we can’t market it if we don’t have control.”