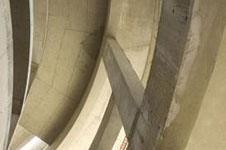 Concrete is the most widely used construction material in the world, yet its sustainable ratings are amongst the worst. Whilst once created it offers plenty of environmental advantages as a product, in terms of if offering a high degree of thermal mass, concrete is made of cement. This is an environmentally hazardous material. According to the Sustainable Development Commission, 4% of CO2 is caused by aviation, while cement-based building materials, including concrete, account for between 5% and 10% of all CO2 emissions.

The material is made by mixing together limestone and shale -- their constituents being calcite from limestone, silica, alumina and minor amounts of iron, and firing the ground-up mix in a kiln to temperatures of over 1,400ºC. The energy required to heat the kiln and the vast clouds of toxic chemicals given off add up to a huge dent in the ozone layer. Plus, there is the pollution caused by processing dust, or the embodied energy of transporting raw materials and the finished sacks of cement.

There are a variety of cement alternatives around boasting better eco-credentials including lime-based cement, Aircrete, Ceramicrete, EcoCement, C-Fix or even eco-friendly concrete that uses waste materials as aggregates.

Lime-based cement is probably the most widely known and oldest alternative to Portland cement. Environmental advantages include durability, an ability to breathe and a relatively non-intensive production process.

Aircrete, made from various materials including ground sand, pulverised fuel ash cement, lime, aluminium powder and water, is a lighter-weight alternative. Materials are blended together into a mixture which foams to create an exceptionally strong and light concrete with high thermal insulation.

The material is normally used to manufacture blocks, which can be used for building walls or a part of block and beam floor systems. Other additives for cement include silica sand, fly ash, iron oxides and bauxite.

Ceramicrete is a phosphate ceramic with many different applications, ranging from treatment of hazardous waste to the creation of construction materials including bricks, blocks and roof tiles.

Created by Argonne National Labs in the US, the material is formed by mixing magnesium oxide powder and soluble phosphate powder with water. The process is very similar to mixing concrete, using commercially available equipment that mixes the powder components into the binder.

The wet mix can then be pumped, gunned, or sprayed and the resulting material is nonporous, with compressive strength higher than that of concrete.

Australian sustainable technologies firm TecEco has devised EcoCement. By blending magnesium oxide and conventional cements, the material promises to lessen the need for burning fossil fuels, and forms clean, strength-giving minerals that can be mixed with many different aggregates and fillers.

Once it is in porous concrete form, it needs CO² to harden and set. Therefore, its makers cite that it absorbs large quantities of the greenhouse gas that concrete is partially responsible for.

C-Fix or carbon concrete is a thermoplastic heavy-duty binder that has been developed by Shell and the University of Delft as a use for waste left over from fuel production. Already used as a tarmac substitute on roads in the Netherlands, the material is claimed by Shell to be suitable for replacing 90% of concrete and asphalt applications.

While oil extraction is not the most environmentally friendly process in the world, the use of this waste does maximise production potential and negate the requirement for the high energy kiln processes in conventional cement making.

Australia’s Commonwealth Scientific and Industrial Research Organisation have created Hyssil, a high strength concrete that boasts the properties of concrete but reduces weight by half. It also has five times the thermal resistance of conventional concrete and can be used to produce load bearing or non-load bearing prefabricated building components.

Synthetic, steel or blends of both types fibres, such as those in Propex Concrete Systems, can also be added to concretes to greatly improve strength and resistance to cracking. While these don’t cut down on the percentage of cement used in a mix, they do mean that less concrete, and so less cement, is required on construction projects.

Another alternative is the use of waste materials as aggregates. The technique doesn't replace Portland cement but does make a more eco-friendly concrete. Plus, it can cut down on landfill and reduce mining for sand and gravel.

Thanks to: World Changing and The Guardian.