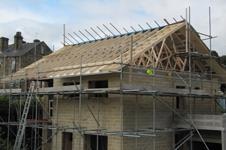 The UK will not be able to hit its target of reducing carbon emissions unless it urgently addresses its serious skills shortage, according to a report published today by the Royal Academy of Engineering.

The UK has set a target of reducing carbon emissions 80% cent by 2050, however the Academy says the challenge of achieving this is vast and will require a dramatic increase in skills and awareness in the construction sector.

Doug King, who authored the report, said: “The sheer pace of change in the regulation of building energy performance has already created problems for the construction industry and the proposed acceleration of this process, aiming to achieve zero-carbon new buildings by 2020, will only widen the gulf between ambitious government policy and the industry’s ability to deliver.”

The new discipline would investigate the areas of natural science that relate to the energy performance of buildings and their indoor and outdoor environments.

According to the report few in the construction industry know how to apply the principles of building engineering physics in the design of buildings and low-carbon design is scarcely taught at university level.

The report also calls for more reliable information on the actual energy and carbon performance of newly built or refurbished buildings, to validate new designs and establish benchmarks.

It says government should lead by example, ensuring that full commissioning and post-occupancy evaluations against design targets are undertaken on all new publicly funded projects.