RIBA sends legal letter to its own presidential candidate 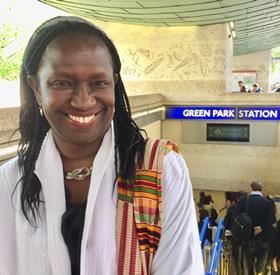 The RIBA has written to one of its own presidential candidates ordering her to stop making “damaging allegations” about the institute.

This amounted, he said, to a “flagrant breach of confidentiality, is unsubstantiated and is damaging to RIBA and its chief executive officer. In particular, details of the chief executive oOfficer’s salary are business sensitive and personal to him”.

Owusu said she made the remark at a presidential hustings in Leeds last week after questions about remuneration and the sale of RIBA Enterprises. The average architect’s salary is around £40,000.

Robertson accused Owusu of breaching the guidelines for RIBA presidential elections “in a serious and repeated fashion”. He listed some examples of what he called her unsubstantiated allegations, including her 2015 claim that the RIBA is institutionally racist.

He added: “These public statements are very damaging to RIBA’s reputation.

“This is all the more serious as you are a trustee of RIBA, owing fiduciary duty of care to the organisation whose interests you are expected to preserve and promote.

“As Honorary Secretary, it is my role to preserve the governance and charitable function of RIBA. Your recent media activity is promoting your personal interests, running for Presidency of the RIBA, over and in breach of the duty of care and fiduciary standards of service you owe the organisation.

“I am therefore obliged to ask that you cease and desist from making further, damaging public statements about the RIBA, whether in the press, at the Hustings, on social media or any other public forum. As Honorary Secretary I will take the necessary measures to protect the reputation and standing of our professional body, for RIBA, its Council and all of its members.

“I would welcome the opportunity to discuss this matter with your personally and I know that our President and Chief Executive would join me in entreating you to work with RIBA and not against its best interests.”

Owusu wrote back to him, copying in the press and some of her supporters: “I merely quote a tweet from Prof Michael Stacey which stands unchallenged. Members who pay their subscriptions have a right to know how their money is spent and I will not be silenced. You will receive a formal response in due course.”

She described the cease and desist letter – which can be a precursor to legal action – as a “blue frightener” and said she was intimidated by it but reiterated her refusal to be silenced.

“This letter will have been pored over by a lawyer which means members’ subs are going into this kind of caper,” she told Building’s sister title, BD.

The final hustings is in London tonight (2 July) at 76 Portland Place. The other candidates are Alan Jones and Phil Allsopp.