Materials shortages are the biggest challenge for construction sector growth this year as the industry continues its recovery from the covid-19 pandemic, the RICS has warned.

According to the organisation’s UK construction and infrastructure monitor, workloads bounced back in the first three months of the year to their highest level in five years. 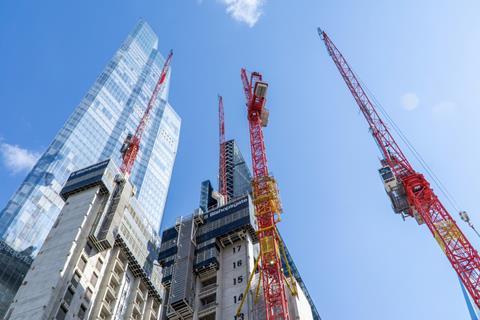 Tower cranes hard at work in the shadow of 22 Bishopsgate in the City of London last month. More than half of firms questioned by the RICS said materials shortages was their biggest concern to future growth

The latest RICS survey reported the highest reading for workloads since the early part of 2016, with 26% more respondents reporting a rise in workloads at all sector levels. This is up from 2% in the final quarter of 2020.

But the majority of respondents, 57%, said a shortage of materials was their biggest worry to the momentum being maintained – with 44% expecting workloads to continue to rise over the coming year.

Projects and firms at both ends of the scale are already feeling the impact of materials shortages, such as timber and steel, with the Construction Leadership Council, Construction Products Association and Federation of Master Builders all issuing warnings in the past week.

Financial constraints and a shortage of labour also continued to be issues holding back projects but money worries have lessened significantly since this time last year, when 70% of respondents reported it as their biggest challenge, compared to 45% in this report.

Overall, the RICS said private residential had driven the increase in workloads, with 39% of respondents reporting a rise over the first three months of 2021. This is up from 10% in the previous three months.

Infrastructure workloads also picked up, with 34% of respondents reporting a rise, up from 26%. Social housing and public works also increased over the quarter, as did private industrial and commercial.

Respondents also reported an increase in new business enquiries as the covid-19 restrictions have gradually lifted since 8 March when schools went back after being shut since the beginning of January.

And for the third consecutive report, respondents have reported a rise in new hires.

Simon Rubinsohn, RICS chief economist, said one quarter’s data was not enough to make a judgement on whether the industry had recovered from covid but he said the signs were positive.

He added: “The indications are that the industry has adjusted relatively well to covid-related work practices with most respondents to the survey suggesting only a small hit to productivity.

“Alongside this, the fact that over 80% of respondents are not seeing evidence of tenders coming in below bids is another positive signal regarding how the sector has weathered this storm.”

The survey also looked at the issue of project cancellation because of the pandemic. For housing and infrastructure sectors, the results suggested between 3% and 4% of projects have been permanently pulled rising to 6% when looking at non-residential.

The RICS also said previous estimates of any loss of onsite productivity had been significantly reduced, with the hit now put at around 5% compared with projections closer to 16% in quarter two last year.

Looking ahead, 44% of respondents said they expected workloads to rise for the coming 12 months. The greater level of confidence is also reflected in profit margins, which returned to positive territory for the first time since quarter four 2019.