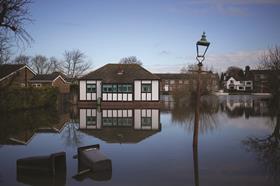 The long-awaited introduction of rules to boost the inclusion of flood alleviation measures on developments has been delayed for the second time this year.

Under the Flood and Water Management Act 2010, developers will have to install sustainable drainage systems, which allow more water to seep into the ground rather than flowing into the waste water system, and have their plans to do so approved by local Sustainable Urban Drainage Approval Bodies (SABs).

But four years after the law was passed the regulations to implement this part of the law have not come into force, largely because many local authorities have not set up the SABs.

The changes had been due to take effect in October 2014, but in a letter to various stakeholders including the Home Builders Federation and the Local Government Association, Peter Unwin, director general of the Department for Environment, Food and Rural Affairs (Defra), confirmed this implementation date had now been scrapped.

He said: “While several departments are working hard on this with Defra’s Sustainable Drainage Systems (SuDS) team, it has become clear that we will not be in a position to implement Schedule Three [the regulations] from October 2014, as we had hoped.”

Unwin added that the government was “committed to implementing SuDS at the earliest available opportunity, but not in a way that has any adverse impact on development”.

He also said that the secondary legislation required to implement the regulations would be laid in parliament six months before it came into force to give all stakeholders time to prepare.

The delay is the second this year. The regulations had been due to come into effect in April but were pushed back to October at the start of 2014.

David Balmforth, senior vice-president of the Institution of civil Engineers and spokesman on flooding, said the delay was “extremely frustrating”.

He said: “SuDS is only one of the measures that we need to deal with flooding risk management, but it’s an important one.”

Balmforth said that it would be difficult to get SuDS rolled out to existing developments, which he said was necessary, until they were included in new ones. Developers have previously said the requirement to use SuDs could increase the costs of some developments.

Following the latest delay, a spokesperson for the Home Builders Federation said the delay was “sensible”.

He said: “I think it is common sense that until the local authorities have the SABs in place, you cannot implement the proposed legislation, otherwise it doesn’t work.”

The Defra spokesperson said: “We are working with the developers and local government to develop the processes, standards and guidance. This takes time but it is vital that we get it right and don’t rush it.”