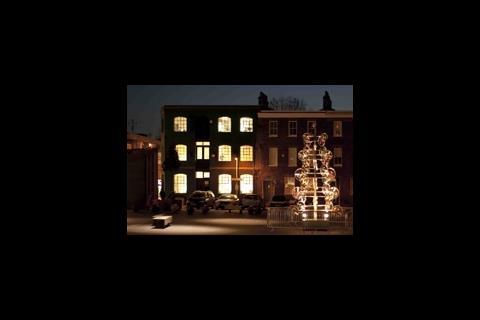 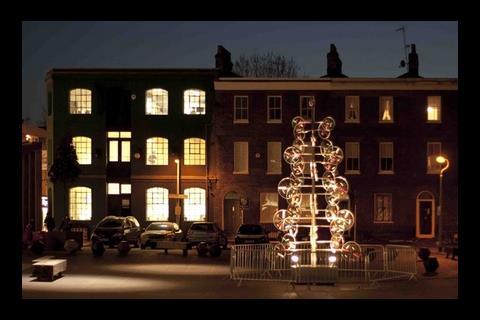 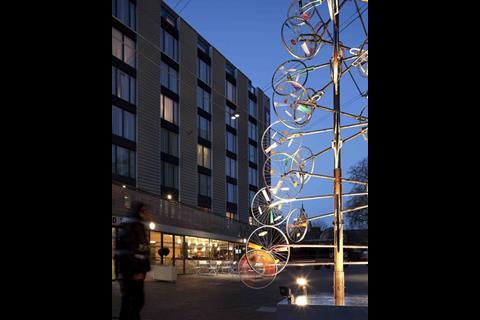 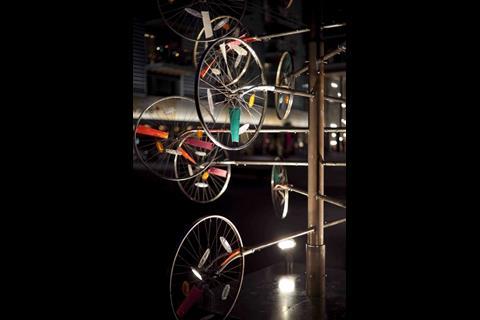 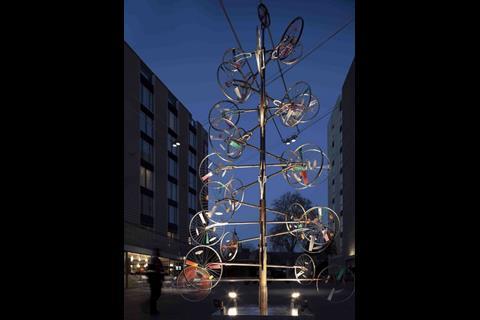 Sustainable architectural practice Sarah Wigglesworth Architects has been commissioned by developer Igloo to create an eco-friendly Christmas tree for a public square in London.

The Bermondsey Square tree is composed of 35 recycled bike wheels, set on a simple structure. The wheels are on loan from UK charity Re~Cycle who restores bicycles using used parts to send to Africa. “Fairy lights” have been created using reflectors.

The design has been manufactured as a kit of parts for future storage and reassembly. It is intended that the tree will be reused every year.

Hatton Metalcraft made and built the tree in one week and together with Sarah Wigglesworth Architects, Oblique Workshops and Structural Engineers Teckniker it was erected in the square in a matter of hours.

The concept is for the wheels to be capable of moving under some form of renewable energy. Early versions of renewable energy involved people pedalling, connected to the wheels through bicycle chains, but wind power offered simplicity and speed, with each wheel acting like a tiny wind turbine attached to the end of every branch.

The tree is intended to fit in with the green ethos of the square, the buildings of which use a communal energy plant with heat exchangers in each apartment and a cooling system by which outside air is humidified and used to cool the circulating air. This form of natural ventilation delivers 60% reduction in carbon emissions and 50% lower running costs.

David Roberts, deputy chief executive of Igloo said: “We hope the tree's presence in the square will contribute to a number of measures we are taking to actively encourage cycling in London."

Sarah Wigglesworth said: “The team brainstormed a number of ideas during a design charette. A theme emerged, the idea of promoting green transport in the capital which relates to our cycle store, also in the square. We are all proud of the resulting tree, and hope everyone enjoys it."