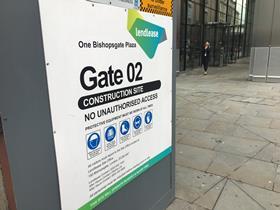 Another law firm has begun a class action against Lendlease on behalf of angry investors over a share price plunge last November.

The firm, which is listed on the Australian stock exchange in Sydney, told the markets on 9 November that it was facing a $350m (£189m) writedown at its engineering and services division because of problems on a road scheme in Sydney called NorthConnex.

It also said the business faced issues to do with wet weather along with remedial work arising from defective designs on other projects.

In April, Australian law firm Maurice Blackburn, which is based in Melbourne, said it had begun taking registrations for a class action against the firm.

It alleges Lendlease broke Australian law by failing to properly inform its shareholders about serious issues in its engineering and services arm and by “engaging in misleading and deceptive conduct”.

Now Sydney firm Phi Finney McDonald said it wants to hear from investors who bought Lendlease shares between 17 October 2017 and 25 February this year.

It said the claim relates to a “catastrophic underperformance in [Lendlease’s] engineering division” following announcements on 9 November and 25 February 2019 – the day after it published its half year results for the six months to December 2018.

In February, Lendlease said a review of the engineering and services business meant it was now non-core and that it was “no longer a required part of the group”.

In a statement on its website, Phi Finney McDonald said Lendlease’s share price fell 27% in the three days following the 9 November announcement and a further 10% in the days after 25 February.

The firm’s managing director Ben Phi said: “Our clients allege that Lendlease failed to keep them properly informed of the problems and their gravity over a prolonged period.”

In a statement made to the Australian stock exchange, Lendlease said: “Lendlease denies any liability and will vigorously defend the proceedings.”

Lendlease is due to release its full year results for the 12 months to the end of June next Monday.