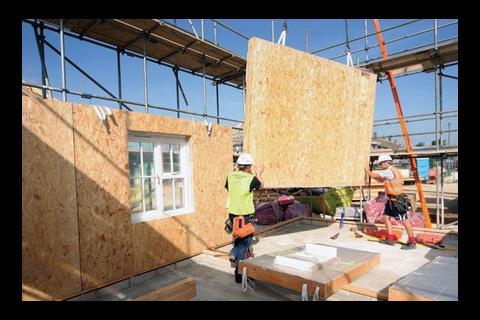 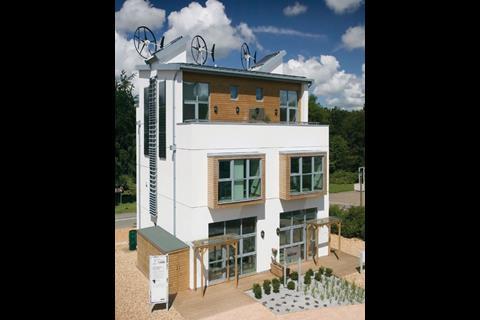 When the Sigma eco-home at the BRE Innovation Park failed to hit the upper bands of the Code for Sustainable Homes, the blame was laid squarely on the building fabric. Now its maker is having another go

In June, housebuilder Stewart Milne published a warts-and-all assessment of the Sigma home it built at the BRE’s innovation park near Watford. Sigma was the first house in the UK to meet level five of the Code for Sustainable Homes and was intended to serve as a prototype to identify the challenges and solutions to building near-zero-carbon, affordable homes. But as the two-year post-completion study shows, housebuilders still face plenty of hurdles.

The headline finding of the study was that low-energy homes, not micro-renewable add-ons, are the only viable way to meet code requirements on a mass scale. It revealed that the Sigma home used considerably more energy than predicted and nearly twice the level permitted in Passivhaus standards.

“This was driven by three things: the micro-renewables underperforming, occupant behaviour and the building fabric not meeting the targets we set,” says Stewart Dalgarno, group product development manager at Stewart Milne.

Despite the building’s fabric being better than a standard home, its as-built heat loss parameter was about 40% worse than predicted. The conclusion was that, if this could be improved, designers would have a way of meeting the upper bands of the code that would not rely heavily on expensive on-site renewables.

With this in mind, Stewart Milne is developing a new building system – Sigma II – that is also based on closed-panel walls but with an improved design, to increase the envelope’s performance.

The construction of the walls for the original home focused on getting the overall U-value as low as possible, but the design proved complex to construct. The large-format panels comprised OSB facings separated by 140mm solid timber studwork with fibre insulation. One of the main problems was that the studs created a repeating thermal bridge that accounted for about 15% of the heat loss.

Measures were put in place in the first Sigma house to reduce this loss. A reflective vapour control barrier was fixed on the inner face, behind the plasterboard finish, and on the outside the building was clad in rigid board insulation and external render. The downside to this was that it required four different subcontractors on site, it took a long time, was expensive and complicated and, in the end, did not perform well enough.

The idea for Sigma II was to come up with an improved system that could be largely factory-made and that would also tackle the issue of thermal bridging. This is likely to play an increasingly important role in envelope construction with the overhaul of SAP – the software tool that shows compliance with the Building Regulations.

In the new version of the software, this will assume a worst-case value for heat losses through the thermal bridges (the Y-value) of 0.15 unless designers make the effort to assess these separately. The Sigma II system is undergoing 3D thermal modelling to assess how well it performs, but Dalgarno expects it to achieve an overall Y-value as low as 0.02.

This was driven by three things: micro-renewables underperforming, occupant behaviour, and the building fabric not meeting the targets

This is achieved by a specially developed “space stud” which replaces the original 140mm solid timber studs in the panel. Looking similar to a truss, these studs comprise two timbers joined by five metal webs that provide the thermal break. These panels are combined with floor cassettes, which have a pre-insulated edge junction to further cut down on bridging.

One of the advantages of reduced thermal bridging is that the multiple layers of higher performance insulation previously used can be replaced with cheaper, blown fibre or expanded polystyrene beads in the cavity of the panels.

The other main area where the envelope of the Sigma home fell down was airtightness. It achieved a permeability of 2.3m3/h/m2, making it more than twice as leaky as intended. To address this, the membrane on the inner face of the panels, which was used to provide the primary airtight seal, has now been designed out in favour of using the panels’ OSB sheathing. Locking joints between the panels and factory-fitted foam seals on the top and bottom that compress as the panel is lowered into position provide the airtight seal. “We feel this is a more robust and cost-effective way to get the performance than using the membrane, which was very fiddly, time-consuming and expensive,” says Dalgarno.

The vertical joints are taped while self-adhesive grommet patches are used on the main service penetrations to form a seal. The idea is to get the services layout frozen while the panels are being made in the factory. “On the Sigma house we were drilling oversized holes and filling them with foam later, which didn’t work,” adds Dalgarno.

The final piece in the jigsaw is the windows. Where the frames butted up to the walls were major leakage points on the Sigma home. The solution, says Dalgarno, is factory-fitted windows. A fixing has been designed that enables the windows to be installed when the panels are horizontal on the production line. These sit recessed in the opening for transportation, and when the panel is erected they are pushed out from the inside against the outer brick skin. “This does away with having to fit the windows from the outside, which has health and safety issues, particularly for the heavier, triple-glazed units, which are needed for the upper levels of the code,” he says. “It also means we can provide a better, factory-fitted seal between the window and the wall.” This takes the form of a flexible membrane bonded to the frame and wall, while a pre-installed, self-adhesive weatherseal is used between the frame and the brickwork, replacing the usual mastic seal.

Dalgarno is confident this will deliver an airtightness of 3m3/h/m2 but has the potential to get down to the 1m3/h/m2 they originally targeted. The overall thickness of the wall is 412mm: “It’s better than the thin-wall solution that has let us down and isn’t deliverable en masse,” says Dalgarno.

The system is now undergoing testing to attain British Board of Agrément certification and NHBC approval, which will take another 12 months, but the first houses to use it should begin on site this side of Christmas. Stewart Milne is also working on a series of standardised designs for achieving levels three and four, aimed at the affordable housing market.

“Our aim was to develop a fit-and-forget solution that would enable us to meet the energy criteria of level three of the code using the envelope alone and without the need for renewables,” says Dalgarno.

As it stands, the Sigma II system gives a level-three-plus rating, but Dalgarno is already working on a system that will enable it to reach the level four criteria by using more exotic materials such as aerogels, vacuum insulation and energy flow cells. The research is already under way – so the industry might not have long to wait.