Exclusive: £55bn school building programme was improving pupil performance until it was scrapped by Gove 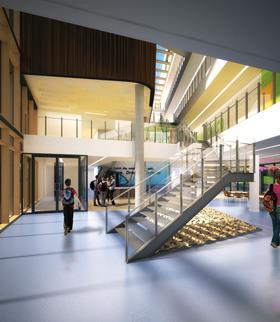 The report, obtained by Building through Freedom of Information laws, revealed the results of an analysis of educational attainment in schools built under the Building Schools for the Future Programme (BSF), which was scrapped by the coalition government in 2010.

The report (attached below, right), produced for the board of former schools capital agency Partnerships for Schools in September 2010, found that “significant improvements” in attainment and attendance were made in around two-thirds of the schools studied.

The findings are likely to prove controversial as education secretary Michael Gove has consistently downplayed the importance of the school environment as part of his justification for scrapping the programme, insisting that the quality of school buildings has little impact on the performance of teachers or pupils.

The report comes after Building revealed in April the details of a wide-ranging piece of post-occupancy research undertaken by PfS into BSF schools, which the Department for Education (DfE) had refused to publish. At the time Building was told that a further piece of research into educational attainment had also been undertaken by PfS, which also had never been published.

The report said: “What is significant is the strong pattern of improvement over time and the clear differences in attainment in most of the schools.” It also said the research should be continued “to secure the longer term view of progress and impact”.

However, a former senior figure at PfS said the research was discontinued as it was considered “politically inconvenient”.

Labour’s shadow education secretary Stephen Twigg hit out the department’s failure to continue the research or publish the initial findings. He said: “This research suggests a link between the quality of school buildings in BSF and the quality of education. I welcome its call for further research to track pupil performance in BSF schools.”

Nusrat Faizullah, British Council for School Environments chief executive said: “This report begins to uncover the link between the learning environment and educational outcome for pupils, parents and teachers.It is only with this type of information that we will be able to use resources efficiently to create decent schools.”

A DfE spokeswoman confirmed the department had not carried out any further research, but said DfE would undertake analyses of schools built through the Priority Schools Building Programme.

“Our priority is to deliver robust standards and high quality teaching to all pupils,” she said.