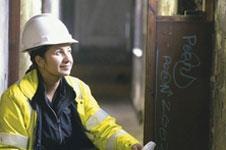 Sexual harassment, long hours and a macho culture are putting women off from rising to top jobs in the construction industry, new research has revealed.

In a paper published today by the British Sociological Association and SAGE, Jacqueline Watts, who interviewed 26 UK women, claims all said they were unhappy with either the struggle to balance their family and work lives, or the sexist attitudes they had experienced on site

Many of those interviewed told Dr Watts that they had doubts about the long hours managers had to work and the pay they received.

One woman, trying to juggle work commitments with working part-time after the birth of a child, said she had even been persuaded by her employer that management and motherhood couldn't mix and she left the company.

Watts' paper claims the main problems stem from a site subculture of crude language, displays of pornographic imagery in site offices and a resistance to any kind of managerial control.

Commenting on the results, Watts said: “As might be expected these women spoke with disillusion about the construction industry. For a majority of participants in management roles the demands of the job appeared overwhelming, forcing some to choose between being an engineering manager and having a family.”

Watts added: “Most of those interviewed valued their experience of managing on a building site, but found the social situation 'abrasive'.”