Sheppard Robson has been given the green light for a mixed-use hotel development in Lincoln’s historic city centre.

Plans for the 150-room, four-star hotel on the High Street, which will be built for German-based real estate investment manager Patrizia, were first unveiled in November last year.

Lincoln council approved the scheme which will be directly opposite its own main office in the city’s grade I-listed 16th-century Guildhall.

An existing department store currently occupied by House of Fraser will be flattened and replaced by three new-build blocks ranging from two to five storeys in height.

The plans include a restaurant, bar and event spaces framing a new public courtyard, and 985sq m of retail space.

Sheppard Robson partner Claire Haywood said: “We are living in a time when our cities, and how we design and inhabit them, is under intense scrutiny.

“We are pleased that this project engages with many pertinent themes: the future of shopping and how large retail sites can be rethought for a changing world; the value of high-quality public spaces to bring people together while not feeling confined; and, with the possibility of behavioural change on the horizon, the importance of flexible, mixed-use development that can adapt to changes ahead.”

St Peter’s Passage, a narrow alley believed to have existed since medieval times which was closed by the council last year after it was taken over by drug users, will also be reopened and restored as part of the scheme.

Historic England had raised an objection in pre-application talks with the council because of the demolition of the department store in a conservation area, but planning officers were won over by the “high quality” of the development.

House of Fraser announced plans to close more than half of its 59 UK stores in 2018 as the 171-year-old chain buckled under the combined strains of a weaker pound and competition from online shopping. 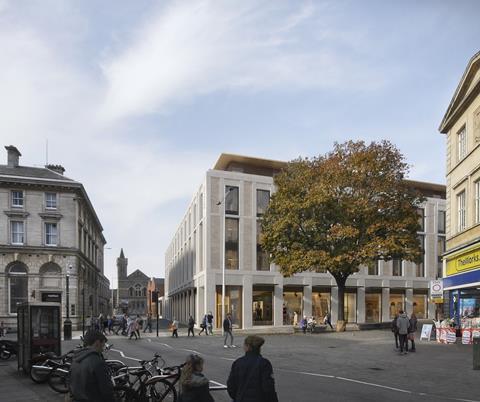