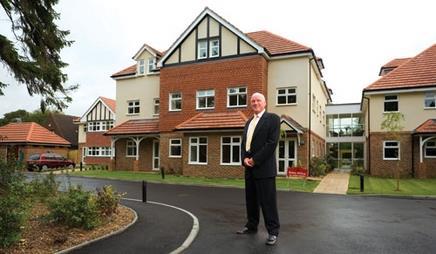 The first time was in May, when the group, which is listed on the alternative investment market, announced that it had failed to sell a single home in the six months to 31 January 2008.

Coupled with the company’s pre-tax loss of £393,970 over the same period, this was proof that the housing slump had reaching the “last-time buyer” market.

But the credit crunch had not caught Wren off guard. It had stopped building 10 months earlier to begin a fundamental rethink of its business.

The second time it came under the spotlight was two weeks ago when it announced it had raised £4m from investor Wainford Holdings: £1m in equity and a £3m loan. This made Wainford the group’s largest shareholder (see below).

Paul Treadaway, chief executive, says this investment will kickstart Wren’s move from retirement homebuilder to extra care provider. He explains: “The extra care market falls between active retirement units and nursing homes. These are proper flats and it’s like being in your own home, but with in-built flexibility, because you can buy the extra care as the need arises.”

It’s still a niche sector but one that Wren believes will grow. Earlier this year, stockbroker Brewin Dolphin said the extra care model was likely to gain traction in the UK, given that developments like these pass more easily through the planning system than traditional retirement homes.

It said: “Ultimately, if the UK market follows the US, it is not unreasonable to assume that extra-care provision could steal market share from the traditional residential care market.”

So is the company ultimately moving from housing developer to healthcare provider? Will Wren avoid being lumped in with the flagging housebuilding sector and reclassify itself on the stock market in the healthcare bracket? “We’re not ruling anything out at the moment,” says Treadaway.

He recalls the change of mood last July, as the first signs of the credit crunch made their way across the Atlantic. “You could just smell it. Firms were starting to go bust so we took a view it was the right time to change the model. I said to the staff, ‘We’re going into the trenches and putting on our tin hats.’”

Firms were going bust, so I said ‘we’re going into the trenches and putting tin hats on’.

James Butterfield, corporate development director, adds: “We’d spent some time in the US and could tell things were getting overheated. Our end of the market suffers the knock-on effect of an absence of first-time buyers.”

Work on the first extra care development in Warlingham starts in January and a second will follow shortly afterwards. It has eight sites on the radar and is among a minority of developers actively looking to buy sites.

Treadaway says the facilities management (FM) side of the business will contribute 10% to turnover, and refuses to rule out the option of the company eventually setting up a separate FM business within Wren.

The company outsources all construction to local mid-sized builders and will continue its minimalistic approach to staffing. Treadaway explains: “There are about six full-time staff and we’re not looking for a cast of thousands. I’ve always believed people can do their own typing.”

Wainford Holdings is run by Dominic Wainford, who was positioned joint 1,598th in the 2008 Sunday Times Rich List with an estimated net worth of £47m. Following the fundraising deal he will have 19.5% of Wren’s equity. Treadaway says: “He’s as excited as the other investors and wants to accelerate the growth.”

At this stage the company is cagey about whether it would raise more money, although it is understood to be talking to other investors. Butterfield chooses his words carefully:

“If the extra care scheme increases in line with expectations we are not averse to fundraising opportunities on appropriate terms, both directly into Wren or via a separate investment fund.”

There are certainly no plans to remove the company from alternative investment market. “I don’t regret floating at all,” says Treadaway. “It’s been good in that we are taken seriously and it raised our profile.”