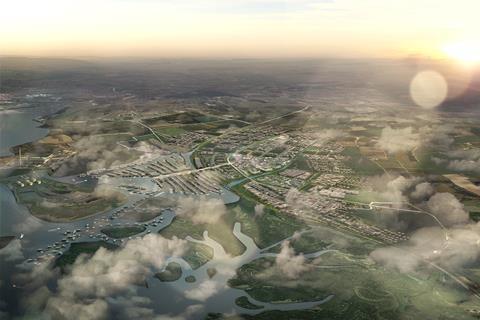 The entrants have been shortlisted for a £250,000 prize and have until August 11 to further develop their proposals before final judging.

This year’s prize, devised by Next chief executive Lord Wolfson, was designed to generate the best ideas on how to deliver a new garden city in the UK.

As well as the five finalists, five of those who submitted entries have been awarded £1,000 “light bulb” prizes for particularly good innovations in certain areas of Garden City creation. Recipients of this include the civil servant formerly in charge of Gordon Brown’s eco-towns programme, Henry Cleary, and construction economist Martin Hewes.

In addition a further four entrants were highly commended for their submissions. These include a submission by Peter Freeman of Kings Cross developer Argent, as well as one by veteran planner Sir Peter Hall. Of the 279 entries, 20 were from children under 16, of which three were awarded £50 each for the quality of their contribution.

Shortlisted finalists will receive £10,000 to work up their ideas in more detail. Shelter’s is alone in actually identifying a specific site for the new Garden City, on the Hoo peninsula in Kent.

The winner will be announced in early autumn.

The five finalists are: