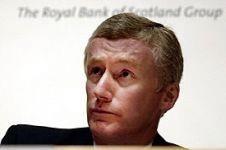 Sir Fred Goodwin, the former chief executive of the Royal Bank of Scotland, is being lined up for the position of chief construction officer, Building can reveal.

Officials at the business and enterprise department are understood to have approached “Fred the Shred” about the new role.

As chief construction officer, Sir Fred would be called upon to champion the concerns of the building industry in government circles.

A source close to the deal said: “It makes perfect sense, if you think about it. Fred is very interested in regulatory issues, and has plenty of time on his hands.”

She said: “Construction really needs someone to help rebuild its reputation after the OFT inquiry and allegations of blacklisting. The appointment of someone with the trust and integrity of a former director of the Royal Bank of Scotland would really show people what the construction industry was all about.”

Goodwin is thought to be attending a low-key meeting with construction industry leaders at the Royal Exchange building in the City of London today. Sources said the venue was chosen for its “convenient transport links”.