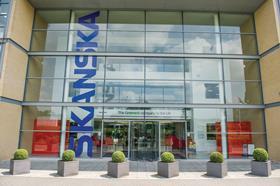 Skanska has confirmed that its London and South East building boss Paul Heather has left the firm, as Building revealed this morning.

He has been replaced as the managing director of its London commercial building business by Steve Holbrook with immediate effect, Skanska said.

Holbrook has been at the Swedish-owned contractor for over 21 years and was previously commercial director. He also joins the firm’s senior management team.

In a statement, the firm said the appointment followed “Heather’s decision to leave Skanska to join another company within the construction industry”.

Heather is expected to join expected to join Sir Robert McAlpine as that firm’s head of its London operations – a role previously held by Vince Corrigan who left at the beginning of last year to join demolition and civils specialist Keltbray.

Last week, Skanska confirmed that Paul Chandler, who was in charge all of the contractor’s UK building operations, was leaving after 34 years. He is understood to have lined up a senior role at Wates.