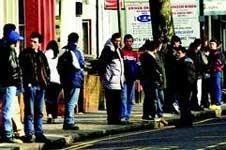 Detailed plans to control the number of skilled migrants coming from outside Europe to work in the UK are to be revealed today.

Under the government's new system, to be implemented in the autumn, skilled migrants will need to accrue a different number of points to enter the UK depending on the level of skills shortage in their particular profession. Points will be awarded according to qualifications and salary prospects.

The government will today announce the second stage of its proposals, providing detailed information on which skills the economy needs to fill gaps in the labour market. Details for points requirements for skilled workers already in the country and who wish to extend their stay were announced in February.

Under the system, applicants for jobs in the UK who are from outside the European economic area must have the correct number of points as well as a job offer from an employer. Employers will also have to show they cannot recruit resident workers.