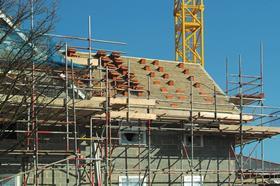 Workloads for SME construction firms have taken a dip for the first time in six years, according to the latest research from the Federation of Master Builders (FMB).

The FMB’s State of Trade Survey for Q1 2019 has revealed that workloads declined for the first time in six years, with 29% of respondents reporting lower workloads than in the last quarter of 2018.

This is up from 13% in the final three months of last year.

Brian Berry, chief executive of the FMB, said: “This dip follows three years of political uncertainty, which have taken their toll on the SME construction sector.

“A perfect storm of diminished consumer confidence, rising material prices and increases in wages and salaries has resulted in the construction SME sector detracting for the first time in six years.”

Almost 88% of builders said they thought material prices would increase over the next six months – a figure Berry labelled “record breaking”.

Around 70% of SMEs also expected wages and salaries to increase over the next six months, up from 66% in the previous quarter.

Berry said: “This is bad news for builders and consumers alike as construction projects, large and small, become more expensive to deliver.”

Berry said the government needed to step in to boost the economy amid Brexit uncertainty with initiatives such as a reduction in VAT from 20% to 5% on all housing repair, maintenance and improvement work.

On a positive note, skills shortages eased slightly among some occupations but the FMB said this was most likely due to less competition for workers because of lower workloads.

Bricklayers were the trade in most short supply with 64% of firms having difficulties hiring them, followed by carpenters, who posed a challenge for 59% of SMEs.