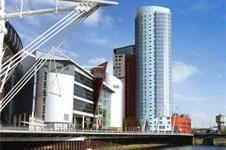 But architect has been forced to reduce headcount by 10%

Architect SMC will change its name to Archial Group, it announced in a trading update today.

But the listed firm has not remained unaffected by the recession, with managing director Chris Littlemore admitting that it has shed around 10% of its employees this year.

The most notable change is that the celebrated architect Will Alsop, whose firm was acquired by SMC Group in March 2006, will run his firm as a standalone entity from the Archial brand.

Instead of operating under 14 separate SMC companies as it does now, the group will restructure to five divisions. They are:

But Littlemore admitted that the restructure had been accompanied by a headcount reduction of 10%, or around 30 employees. It will also merge its two Edinburgh and three Glasgow offices to one in each city at some point in the next year.

He said: “Any organisation has to look at its operations, and we have had some cost reductions.”

Littlemore added that the decision to retain Alsop’s name on his practice was common sense.

He said: “We felt it entirely appropriate that the [Alsop] brand be maintained in its own right. It is different from the other services that the company provides, and it is important that the integrity is retained.”

The restructure follows a turbulent two years for SMC. Following an intense series of acquisitions in 2006, the SMC Group was forced to issue profit warnings to the City in January and June of 2007.

In July this year the architect returned to the black with a pre-tax profit of £1.57m for the first six months of 2008, up from a loss of £4.9m during the same period the year before.

The group’s order book stands at about £50m and its shift towards a more defensive position during the downturn has seen the public sector contribution to turnover increase from 31% to 38% since 30 June this year.