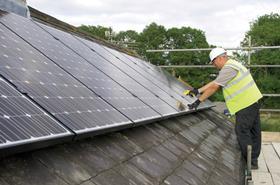 Solar panel installer Southern Solar is to close after yesterday appointing Begbies Traynor as administrator, with the administrator pointing the finger at thegovernment’s policy changes on renewable energy.

However, following the impact of the government’s Feed-In-Tariff cuts, attempts to find a buyer for the firm - which was established in 2002 by former chairman of the Solar Trade Association Howard Johns – failed, forcing its closure.

As a result, 21 employees have been made redundant.

One of the joint administrators, Jon Beard, blamed cuts to the feed-in tariff as the main reason for the firm’s closure.

Beard said: “It is without doubt that the removal of the Feed-in Tariff subsidy has had a significant impact on the business of the company.

“Prior to the administration we had been seeking a buyer for the business in the hope that its future could be secured.

“However, this proved unsuccessful and we have been left with no option but to wind the company down.”

The administrators say they are now assisting employees to expedite their claims following the firm’s closure, and are examining opportunities to transfer a number of outstanding contracts.

A spokesperson from the Department for Energy and Climate Change said: “It is disappointing to hear this firm has gone into liquidation and we sympathise with those affected.

“Our priority is to keep bills as low as possible for hardworking families and businesses. Government support has driven down the cost of renewable energy significantly and these costs are continuing to fall.

“We are protecting existing investment and bill payers, while reducing our emissions in the most cost-effective way.”