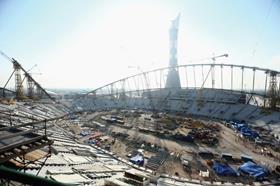 Qatar’s World Cup organisers are putting workers’ welfare at risk by aggressively driving down costs during ongoing tendering for contractors to build stadiums, a source close to the bidding process has claimed.

As part of a Building investigation into workers’ welfare in Qatar, construction professionals working in the country said conditions on sites were improving but that the scale of the problem remains huge.

One source close to the bidding for World Cup stadiums alleged the tournament’s client, the Supreme Committee for Delivery & Legacy, was inadvertently disincentivising contractors from providing good welfare standards through a cut-throat approach to cost.

This source claimed: “[The Supreme Committee] still procures on lowest cost. They get 10 prices in [from contractors], then they’ll pick the bottom four and ask these for their best and final price. Normally speaking you’d submit your best price at the outset. So nine out of 10 contractors will cut corners [to win].”

The source alleged the “bulk of the price” on jobs in Qatar is labour costs and when squeezed “something’s got to go”, adding: “You may end up cutting the flights, cutting the meals, or the quality of the food, or saying ‘I’ll go stick him in some slum area’. That’s where some contractors will cut corners.”

But another source familiar with the World Cup stadiums bidding process disagreed: “Yes, it costs to maintain standards, but the Supreme Committee is very aware of that and deliberately put these standards in place. They know the scrutiny will be on them and that they’ve got to [get welfare] right.”

A spokesperson for the Supreme Committee said: “The SC is committed to protecting the health, safety and well-being of the workers building the stadiums for the 2022 Fifa World Cup. We will never compromise this based on budgets.

“All contractors tendering for an SC project are screened for compliance with the SC’s Workers’ Welfare Standards (WWS) before their technical and commercial proposals are even considered, creating a level playing field on which all contractors are encouraged to be compliant with the WWS.

“To-date, 120 inspections have been conducted as part of the SC’s Workers’ Welfare tender inspection audit process. 24 companies failed to meet the SC’s WW requirements and were disqualified from the tender process.

“Inspections do not stop at the project tendering stage, however, and contractors who are appointed to work on World Cup projects are subject to ad-hoc inspections against our WWS for the duration of their contracts.”