St Modwen says it is on track despite profit dip 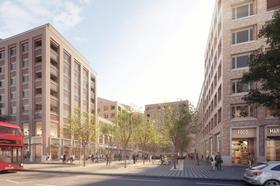 Despite posting an 18% dip in interim pre-tax profit St Modwen said the strategy to re-balance its portfolio was working effectively.

The property developer said it had sold £350m of assets since the end of 2017, bringing total disposals as part of its new strategy a year ago to £635m.

And it said it had increased its committed industrial/logistics pipeline from 1m ft2 to 1.3m ft2 since start of the year, of which approximately two-thirds will be retained.

Noting what he called a “good start to 2018”, St Modwen’s chief executive Mark Allan said: “Since we announced our new strategy a year ago we have made considerable progress.

“Our organisational structure is better aligned to our strategy, our forward pipeline of projects is clear, our net borrowings are down by over £220m and with the sale of £635m of assets we have seen a significant shift in our portfolio mix.”

If approved by Lewisham council the scheme, which was re-vamped following local residents’ concerns, will see a development featuring 393 new homes, including a provision for 64 affordable units, a number of mews-style homes, as well as a convenience foodstore, a pub, cafes, restaurants and a new public square.